Seducing the Preacher’s Daughter Wasn’t Even as Hard as People Made It Sound. 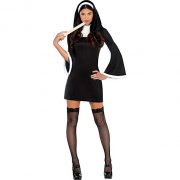 The preacher’s daughter at our school was super hot.

She was not the only preacher’s daughter that went to our school. We had at least four big churches. But, she was certainly the hottest preacher’s daughter that we had at our school. She was not super progressive in her thinking. In fact, she was incapable of any critical thinking whatsoever. She received decent grades, but when it came to self-awareness, she was a total failure. The evangelicals at my school were quite the exclusive little tight-knit cult. I always thought they were nuts, but I had an understanding, as I was raised deeply Catholic. We were all indoctrinated in fear since we were really young.

Some of us just couldn’t cope with the knowledge of our own existence, the knowledge of our own mortality. This girl was an avid follower, to say the least. She was also, a little bit of a tomboy. We were both theater kids and although she may deny it, she loved playing all the boy parts and cross-dressing. I just knew that she was hiding some repressed desire for pussy. She was always nice to me too, even though I was a total dick to her for being a preppy little prude. She sore tight jeans and a flowy shirt every day. Always put on way too much mascara. But, she had a tiny little waist, long little legs, perky little tits, nice skin, and long curly blonde hair down to her ass.

She expressed to me in confidence once that she may not agree with her parent’s beliefs on gay rights to the full extent.

She also told me that some guy in our school showed her his dick, and she even touched it. It was then that I knew that this girl would be slightly more curious and malleable than I thought. I invited her over for Valentine’s day because she expressed to me that she felt sad that she wasn’t allowed to date and guilty about some of the thoughts she had been thinking. Then, I cooked up some brownie batter and we ate that slightly undercooked. I got her platonic/not so platonic flowers. Then we watched an R rated movie that I knew she never was allowed to watch in her home. When the steamy parts game on I watched how her eyes remained glued to the tv.

I watched her swallow. And I knew, that she knew, that I was looking. When she turned, I pushed her long blonde hair back behind her ear and moved real close. I held her eyes and made sure that she knew I wanted to kiss her. Then I very deliberately placed my hand on the back of her neck and pulled her towards me. She seemed really nervous, which was super hot to me. I kissed her slowly and gently. She relaxed like a good little pet! I kissed her harder and deeper and she just sat there and received. She totally wanted it. I climbed over her lap and began tugging her shirt up. I felt her tight tiny little tits and her super small waist.

She placed her hands on my hips hesitantly, so I grabbed them and placed them on my tits.

For some teen phone sex, give me a call! Read more for fucking straight girls!