Panty Fetish: It Was My First Time Selling Used Panties 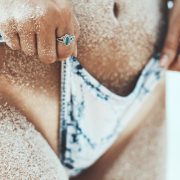 What girl hasn’t thought about selling her panties to a guy with a panty fetish?

It’s a story as old as time: a man with a panty fetish goes and buys a woman’s panties. When I was younger, it was something I often thought about while browsing through Craigslist ads.

I didn’t get a reply right away, so I lay back in bed, wondering if he would get back to me. The thought of meeting up with this guy and giving him my panties excited me, so much so I begin to rub myself through the panties, thinking of this random internet stranger touching himself while smelling my panties.

I spread my legs open, sitting on the bed, trying to get all my pussy juice soaked into those panties. When I was just a few rubs away from orgasm, my phone beeped. I had an email.

The guy was willing to buy my panties. He wanted to pay $50 extra for creamed panties if I was really as young as I claimed in my email.

Want to hear more about people with a panty fetish I’ve sold to? Or want to talk about other fetish phone sex? Call!