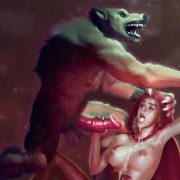 Massive cock seduction is included in the R-rated version of Little Red Riding Hood. I bet you didn’t know that, now did you. Well, in my dirty version of this fairy tale anyway. If you think about, it, she does come across the BIG Bad wolf after all… Take that into account, and the fact I’m on a roll with writing naughty fairy tales (go read my foot fetish sex story), it’s not that surprising, now is it?

Little Red Riding Hood didn’t know what to expect as she trudged through the woods to her grandmother’s house. It was supposedly an emergency, since Grandma was sick, but it wasn’t what worried her. She’d heard of rumors of the BIG bad wolf being extremely well-endowed.

Her grandmother always said to NEVER to talk to strangers, let alone BIG bad wolves, but she knew it would be hard.

As soon as Little Red Riding Hood stepped into her grandmother’s house, she knew something was wrong. The place was uncharacteristically messy. Dust lined the entire living room. The couches were scattered around. The windows were open. However, most importantly, there was something wrong with Grandma herself.

Her appearance had changed since their last encounter. She looked far more muscular and hairy – actually not like herself at all. Little Red Riding Hood stared with a puzzled look as Grandma welcomed her with an unfamiliar voice that came out roughened. The last thing Little Red Riding Hood wanted to do was insult Grandma, so she tried to smile as she stepped inside.

“My, what big teeth you have, Grandma!” she exclaimed, sitting down next to the bed.

Was her Grandma really that sick? Little Red Riding Hood didn’t want to offend her, so she sat a little closer with a smile, before she frowned.

“And what big claws you have, Grandma!”

“It’s all to hold on to the people I want, sweet child.”

No, this was not her Grandmother. She was sure of it now. She raised an eyebrow. “Are you really my Grandmother?”

The wolf jumped from the bed without warning. He threw Little Red Riding Hood away into the corner of the room, tearing off his costume to reveal an incredibly large and furry physique.

“I’ve been waiting to eat you for some time!” he snarled, licking his lips. “You will make for some scrumptious dinner.”

However, Little Red Riding Hood was focused on something else entirely. Her eyes bore into the wolf’s navel, staring at his gigantic cock. She recalled the massive cock seduction stories she’d recently heard.

The cock stuck out straight towards her, the length and the girth making her pussy wet.

“What are you staring at, insolent girl?” the wolf snarled. “You’re about to die!”

It was her turn to lick her lips. “Can I suck it?”

In the midst of his growling, the wolf stopped. “Huh?”

“I want to suck it, and then you can fuck me. I’ve heard stories about you. You’re very well known for massive cock seduction.”

A deafening silence echoed through the woods. The wolf was stuck in his tracks, unable to process what was going on. He looked at Little Red Riding Hood incredulously, wondering if the girl had really asked about his well-known massive seduction techniques. And right about when she was about to die, too! Suddenly, blood rushed to his cock, which gently rose and began to throb.

Little Red Riding Hood didn’t waste any time getting rid of her little red outfit and slid off her red lacy panties as the wolf began drooling. Then she looked up at him and paused, before pouncing on the BIG bad wolf’s cock. She held it in her hands and pushed it into her mouth. As she sucked on it, her tongue stroked his cock with fervor and uninhibited lust. It was finally her turn to experience the wolf’s famous massive cock seduction techniques! And she definitely wanted to make it count.

Her mouth worked in tandem with her hands, making sure the BIG bad wolf knew just how much she loved his cock. Soon enough, she had the wolf gasping roughly, then he brutally turned her over on her hands and knees.

The wolf placed its claws on her smooth ass, spreading it apart and put his cock where it belonged. Little Red Riding Hood squealed with delight every time the gigantic cock penetrated her, and the wolf made sure to push the entire length in. Each thrust struck inside her stomach, and she gasped with the immense pleasure of experiencing her wolf’s raw, unadulterated, massive cock seduction.