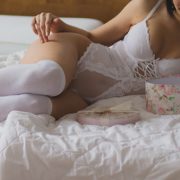 Look, if he was going to be a toy anyway, I might as well transform him!

Surprisingly, this is a very common thing.

Though I appreciated the ideas, I knew what I’d do with him.

After going through the kit, I began to make the potion. “This works only on those with a penis larger than two inches,” the kit warned. “So those without can safely drink.” Following the instructions, I put the crystals in the pot and began to boil them. Then, I mixed in the herbs.

That’s when my boyfriend walked in.

Most of the kit was innocuous, but I confess I was a little nervous. Honestly, I didn’t want him to find out what I was planning. I’m sure he would have complained.  Luckily, my boyfriend just gave me a kiss and asked if this tea was for later.

“It’s supposed to help with performance.” Pleased at my hidden meaning, I gave him a smile.

In response, he smacked my ass. “Excellent. You could really use that. You’ve been getting tired quicker these past few nights.”

I bit back my scream and grabbed the box. Soon, it was ready to strain. So, I poured the liquid into two mugs, making sure no crystals or herbs made it into his potion. Otherwise, I was warned, he might be smaller than I wanted.

And I did not put up with him only for him to be small.

When the potion was cooled, I offered it to him and myself. “Let’s drink up,” I told him.

I tipped the mug into his mouth, forcing him to drink the concoction anyway. When he swallowed, he took a moment to gasp. “What was that?” he asked, shaking. I drank my own mug, and he seemed to calm down just a little bit.

But I could tell it was starting to affect him, immediately. His limbs were shaking.

Smirking, I lead him to the bed. I pulled off his clothes and began to warm his cock in my mouth, watching him try to figure out what was going on. Do you know, he actually shrunk into his cock?

That’s how it happened. As I moved to put him in my pussy, I realized it. His body was shrinking, growing smaller, while his cock remained the same. “Elise. You look-” he muttered, but then he couldn’t say anything more. It was like his mouth had melted shut.

And I learned a good life lesson- never settle.

This fetish up your alley? Call me for more fetish phone sex!