The Hottest Incestuous Couple Should Have Ruled The Seven Kingdoms 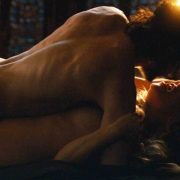 I know your anger may have subsided about the last season of Game of Thrones by now. However, I just can’t help but think about how things should have ended for the series. I think true fans can all agree that the last season was a complete letdown. There were characters that didn’t live up to their potential or had a very unexpected fate (Bran Stark!). And it was mind-boggling when some characters strayed so far from their true selves. The hottest incestuous couple, Jon Snow and Daenerys Targaryen (she’s his Aunt in case you forgot), should have ruled The Seven Kingdoms together. They had one of the best sex scenes in Game of Thrones, their chemistry was palpable and their incest sex was damn hot!

However much fans wanted this, they weren’t able to rule together. After Daenerys burned King’s Landing to the ground, Jon Snow felt the only way to stop her madness was to kill her.

In my opinion, this is how the series should have ended…

The Night is Dark and Full of Terrors!

Let’s pick up at the war against the White Walkers. After an epic battle where many were killed and dragons spewed hellfire upon the dead, Jon is the one that ultimately conquers the Night King. After an exhausting battle where Jon is on the verge of losing his life, yet again, Arya Stark throws him her Valyrian steel dagger. Jon delivers a final fatal blow to the icy eye of the Night King and marks a huge victory of conquering the dead. He is one step closer to becoming the true king that he is meant to be and becoming the hottest incestuous couple to rule the seven kingdoms.

Arya catches up to Jaime Lannister as he rides to King’s Landing. She knows he is going to see Cersei, his twin sister and lover. Although he was not on her kill list, she knows he will be faithful to Cersei above all else and needs to meet his end. She battles left-handed Jaime easily with Needle and stabs him through the heart. Jaime dies with tears in his eyes without ever being able to have a last goodbye fuck with his true love, Cersei.

Arya rides on to King’s Landing with fierce determination in her eyes.

Cersei is pacing in her bedroom chamber anticipating a siege when Jaime bursts through the doors. She goes to him relived and seeking his love and support. He tells her to give up the Iron Throne peacefully but she refuses and says firmly, “I choose violence.”

Jaime slyly slips Needle from his side. He stabs the slender sword through her stomach. The point pierces out her back before being violently pulled out again. She beings to drop to the ground. Jaime catches her swiftly before she falls.

Arya’s smiling face is the one staring back at her as she eases her to the ground. Arya’s face-swapping abilities have shocked Cersei to her core. She gasps, struggling for breath and tries to speak final vicious words but is unable to. She stares into her killer’s eyes as she dies with blood pouring from her mouth. Arya can now check Cersei off her kill list.

Without anyone in her way now, Daenerys makes her way to the Iron Throne in the Great Hall of the Red Keep. Onlookers have packed the room. Jon Snow watches tearfully from the front. She slowly takes a seat at the Iron Throne, savoring the moment. Everyone single person in the room takes a knee for their new and rightful Queen.

Daenerys and Jon, Aunt and Nephew, become great legendary rulers of The Seven Kingdoms. They are the hottest incestuous couple to ever rule and will ever rule with Drogon, the last dragon, by their side.

Sansa becomes the keeper of the North in Winterfell, Arya sails to explore new lands and mysteries of the world. Bran Stark is now an advisor to The Throne (a more suitable role) and Tyrion remains Hand of the Queen.

What do you think?

Should the hottest incestuous couple have been the ones to rule The Seven Kingdoms?

Let’s role-play all their naughty sex, call me for the hottest incest phone sex!