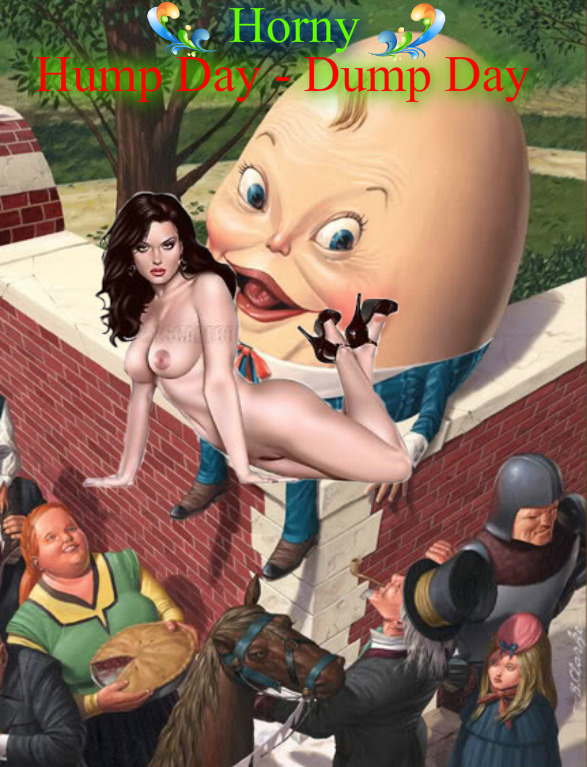 By now you know the cast of characters, Alice, The Queen of Hearts, Joey, Mad Hatter, Cheshire Cat…And the lesser-knowns, but still famous…Humpty, Red Queen, White King, White Knight, Tweedledum and Tweedledee, and so on. But, did you ever hear how Humpty got his name and the catchphrase for Hump Day and it also becumming Dump Day?

Let’s reel this all back in for a second…

This particular day, a girl who thought herself higher up in status came rolling in with dried grass and dirt all over her fine little ass! She was rambling on about some giant hole she’d fallen into and some man-sized rabbit who had caught her as soon as she fell and had his horny way with her. Well, surely she must have fallen hard and banged her head! What a tale, right? Well, no one knew was outside their tiny hamlet, there was a fairytale land in the woods. there, is where such creatures were found. There is where our Humpty originated from. He was a fast oddity in the towns but, he was harmless enough, right?

That was until girls started turning to prostitution and outright whorish behavior. They seem to never have enough sex. What was going on there? It all started when Humpty and his gang started bringing girls into the woods where Humpty turned every Wednesday into a Hump Day and a Dump Day…as it were. Haha. He would take these drugged women and fuck them within an inch of their lives!  The one thing He had going for himself was the size of his cock and the fact that he could rub a clit damn near OFF with that head, and I’m talking about the one on his shoulders this time!

Or do they? remember those journals in my family? Well, call me. I’ll help you find Wonderland and other parts unknown! Giggle