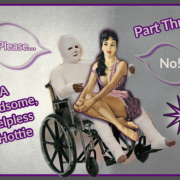 If you recall, I had been having a very bad week.

Eviction, a break up by text message, the loss of my job and worst of all, lack of access to the wild sex parties I had loved so much. Yes, a very bad week. But then, things suddenly started to get a lot better, very quickly.

I interviewed and was hired on the spot for a job in the home of my former company’s CEO. He had just been in a terrible skiing accident that left him a handsome helpless hottie. I wondered why I was hired so quickly, but I realized he didn’t take his eyes off of my big tits and my nice round ass once during the interview.

I had my boobs and my ass to thank for the job.

It didn’t even take an entire day for me to get a peek at his hard cock. It was at least ten inches and very thick – absolutely perfect!  I couldn’t wait to get it into my mouth.  But first, there was to be a lot of teasing. It must be very frustrating to have a hard cock when you can’t touch it.  I couldn’t wait to make it even more exasperating!

I wanted to keep that big, beautiful cock thoroughly disappointed – but not for too long. My plan for him was to take him right to the edge and keep him there until he was begging me for an orgasm. I loved the powerful feeling of denying him for as long as I wanted. Being completely in charge of a dominant CEO was such a turn on. I missed the sex parties that I used to go to with my boyfriend, but this was very sexy too! But how would I tease him? I had so many ideas!

My first step to ensuring his submission was to give him a closer look at these big tits that he was still staring at. A much closer look. I stood right in front of his wheelchair with my legs touching his knees. And then I unhooked the front clasp of my bra and let my boobs bounce out. A neat trick that has served me well in the past. Reflexively, he tried to move his totally restrained arms and touch them. But, of course, he couldn’t. He grunted in frustration, which was so exciting to hear!

I then leaned over and brushed my hard nipples over his bare fingertips that were extending from his arm casts. Again and again, I moved away before he could really touch them. Then I stood right over him in front of his chair. Feeling empowered and also pretty cruel, I pushed my soft tits together and buried his face in them. He nuzzled them as best he could for as long as I would let him. I alternated that with brushing my nipples over his face and his lips.

He tried so hard to lick them and suck them but I always moved away. Handsome helpless hottie got frustrated very quickly and seemed to be getting angry. He asked me what I wanted – money? A job at his company? (haha…)  I told him that it wasn’t about money.  Although in retrospect, it seems that this might have been a good time to embrace fin-dom. It was about having fun and finding out how far I could push him.  We could play and he could be a good boy. Or I could leave.

He thought for a minute and said: “Okay, let’s play!”

A great decision!  His reward for making the right choice was my decision to pay a little bit of attention to his amazingly still rock hard 10-inch cock. It looked delicious!  It was dripping with pre-cum and twitching.  But, he couldn’t touch it at all.

His impotent demands made me laugh. He was hardly in a position to demand anything from me. I knew that he wasn’t a CEO when he was here with me. Really, he was only a handsome helpless hottie and I had all the power. His impressive resume and considerable business acumen meant nothing to me.

Will the CEO stop being a jerk and be a good boy instead?  Hmmm… maybe.