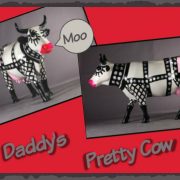 Phew!  That was a long-ass tale about torturing the boss, wasn’t it? What a little sissy bitch!  I think we’ve all had enough of that for a while. I was thinking of doing something completely different this time when then this wonderful fantasy from one of my favorite clients showed up in my inbox.  Let’s call him Mr. B.

So, what the fuck is a Hucow?

For those who aren’t already a fan of this fairly niche kink, HuCow actually involves several mainstream fetishes and kinks like lactation, dominance, submission, objectification, and impregnation.  Something for everyone!

But that’s enough from me.  On to Mr. B’s fantasy…

We can all see the humiliation in your face as you sink down on all fours. You add weight, wincing each time until your breasts stretch and sink all the way to the floor. Your ass has been cleaned out and is so tight that one can barely get a toothpick in it.  And it’s just waiting to be broken open while those lovely tears stream down your face!

You are wearing a little extra eye makeup just so the mess will be bigger and the pain on your face even more humiliating and delightful to look at. Of course, they bring toys for your mega-tight ass and pussy. They bought some of the toys at the sex shop, others at home depot.

And then the line starts again…

Perhaps you should clean her up when we are done with her. Use your tongue.

And if you want to talk about humiliation phone sex, need a bit of my own special brand of sex therapy or anything else, just call me for the best phone sex you will ever have…