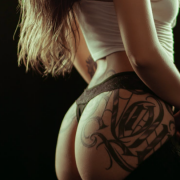 So you see, after my little adventure, I really wanted some revenge! So Lizzie and I cracked a little plan. First of all, we wanted to get this attractive ‘master’ (fuckbuddy) to come and join us in person one time. We’d streamed videos to him and shared all our shenanigans back and forth. But now, the time had come to meet him in person. And of course, we had some nefarious, kinky ideas behind cracking such a plan. We wanted to take him to a glory hole just like he’d asked of us, but we wanted to turn it on him.

He came along willingly.

Of course, he did. I mean, really, could you say no to a pair of pretty little college girls? Pfff, no. So after everything, he fell for the honeypot and came along. He lived only a few hours away, so the drive was an easy trip to make on the weekend. Foreshadowing: it was not an easy trip back! When he showed up, he was ecstatic. First of all, he was finally getting to enjoy us in person. He was all over me and all over Lizzie. He couldn’t keep his hands off of us. And then, we asked if he wanted to go to the glory hole he told us to visit just a few weeks prior. He cracked a smirk instantly.

Of course, he wanted to go and watch a bunch of strangers fuck his two favorite sluts. However, he wasn’t going to go there without fucking us first. So first, we got to enjoy him. We spent the first night lost in the bedsheets, letting him fuck the both of us. But when the next day came, he was all ours to fuck with. Saturday afternoon, we took him to the glory hole he’d made us visit the time before. We knew we were going to seduce him into trying glory hole anal for the first time. After all, he’d convinced us both to do it already! So why shouldn’t he get to face the same fate? Within the hour, we turned him on enough to give it a try.

After all, it was his first time. Glory hole anal took a little convincing, but when he bent over, he was locked in for the night. We locked the doors and lubed him up nice and juicy for the guys on the other side of the wall. The first time he felt a big mushroom head rub up against his ass, he jumped a little. He thought of it the same way we did: “there’s no way that’s gonna fit!” But it definitely did, once the guy worked it in a little. Once the head popped in, he worked it in inch by inch, making our little slave squirm through every second. There was no way he could handle it, but he tried, moaning and groaning, and letting those big cocks turn his little ass sore.