Gang Banged by Three Mechanics and their BIG Tools! 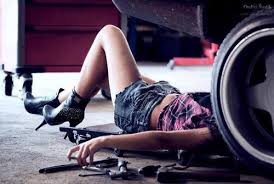 “Sabrina!” The man behind the counter called out, staring down at the invoice in his hands.  “Your car is ready. ”

I walked up to the counter with a smile on my face as I took in the man before me.  He was in a typical blue uniform that mechanics often wore, complete with black smudges across his olive skin.  His name tag read “Mick”, and I thought it suited his rugged good looks.  He had dark features and broad muscles, and I shifted my thighs a little closer as I stared at him. “That’ll be five hundred even,” he said, his dark eyes glancing up at me in appraisal.

I gave him a polite nod, suddenly feeling very hot in my formal business attire.  I began digging through my purse, and panic set in when I realized I had forgotten my wallet. “I’m so sorry,” I said with a sheepish grin.  “But it seems I have forgotten my wallet.  Is there any way we could work something out?  I can just run and grab it…” ”

Sorry.” Mick smirked.  “Can’t let you just leave without paying first.” He drummed his fingers across the counter as a wicked grin spread across his face.  “Let me just get the boss man in here and see what he says.”

Mick opened the door behind him and hollered into the back, the smell of motor oil and grease blowing in from the garage.  A moment later, two other mechanics appeared in the doorway, looking every bit of delicious as the first.

“What’s the problem?” a man with the name “Frank” sewn on his uniform asked.

“Hmmm…” Frank rubbed a finger over his lip in amusement.  “Well that is a problem, isn’t it?”

The third man, a really big and muscular guy by the name of Vic, let his gaze drift over my body before speaking.  “Maybe we could work something out with her.” he said.

“Like what?” I asked nervously. A grin tugged at Frank’s lips as he walked around the counter, grabbing my hand and leading me into the garage.

“You could work it off, ” he said.  All three men crossed their arms and waited for me to respond.

“How?” I whispered, my gaze drifting to the growing bulges in all of their pants.

“Oh, I think you know.” Mick said as he began to unzip his pants slowly.

I took a nervous step backwards and found myself plastered against a car.  Admittedly, the thought of all three of these men taking me had me sopping wet between my thighs.  But I didn’t want to appear to eager.

“It’s okay,” Frank said as he stepped forward and began to undress me.  “You don’t have to do anything but be our dirty little slut for an hour.  Would you like to, Sabrina?”

I whimpered and found myself nodding before I could stop the involuntary reaction.  And soon I was naked with all three men closing in on me.  Frank pushed me back onto the hood of the car, spreading my legs and baring my pussy to them.  “Soaking wet already,” he chided, dipping a finger inside.

Mick crawled up on the hood beside me, shoving his thick veiny cock in my face.  “Suck it,” he ordered.  My eyes widened and I barely had time to open my mouth before he had me by the hair, shoving his thick length down my throat.  At the same time, I felt Frank pushing into my tight pussy with his cock, while Vic straddled my chest and pushed his cock between my tits.

“God you can take that deep,” Mick shuddered, pulling out to wipe his cock across my face.  “Such a greedy little slut, aren’t you?”

I moaned softly as he pulled away, and felt the loss of Frank inside me as they switched places.  Frank sauntered up to me, and my mouth fell open when I saw what had been inside of me.  “You like that?” he said as he stroked his massive cock.  “Let’s just see about how far you can take my cock down your throat.” I groaned as he pushed past my lips, grabbing my throat with one hand to hold me in place.  And just as he began to gag me with his dick, I felt Vic pushing into my ass.

I screamed out in shock at the intrusion, but it was muffled against Frank’s enormous shaft.  He let out a grunt as he pushed even deeper and held himself there for a moment, cutting off my air supply.  My throat and my ass were being stretched to their limits simultaneously, and if that wasn’t enough, Vic had started to slap my tits hard as he fucked them.

I obeyed by straddling him and sinking down onto his cock.  But before I even had time to relish the sensation, I was being pushed forward by Frank, and he was entering my ass at the same time.  It was a sensation unlike any other I had ever experienced, and I cried out in ecstasy.  Mick used the opportunity to shove his cock into my mouth and began ramming it down my throat.  “Fuck yes!” he growled in approval.  “Take it all, you dirty little slut.  Suck that filthy cock.” I could do nothing but oblige as a second orgasm tore through me.

I smiled as I licked my lips and swallowed, rocking back on my heels to stand up.

“I don’t think so,” Frank shook his head, holding me down.  “We’re only just getting started, sweetheart.”