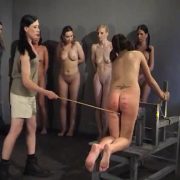 I was not a huge fan of fresh meat initiation when I was a freshman and I was rushing for the sorority.

I survived fresh meat initiation when I was a freshman and now it was my turn. My turn to take part in the stress-inducing humiliation and degradation. As a freshman rushing for a sorority, I felt forced to participate in all sorts of nightmarish things. They made me strip and scrub their bedroom floors with a toothbrush. We were woken up in the middle of the night and led to a basement where we had to take turns trying to fit Big Earl, the massive black sorority dildo. For every time that we tried and couldn’t fit it, we had to do a shot. If you refused, you were refused admittance. They called upon our brother house and all of the upperclassmen boys came and watched us get paddled.

As a sophomore, We had to prepare the scene and clean up afterward. So we set out all of the paddles and lube and tarp even. Who knew how messy one of those scenes was going to get!? Afterward, the tarp ended up always caked in lube and pussy juices. We even went through and tracked dirt in the rooms so that the freshies would have to go in and scrub that off with a toothbrush. This was very time consuming and degrading in its own way, but at least it wasn’t me trying to squeeze big earl into my tight little ninety-pound body while a bunch of senior boys watched! The crowd wasn’t even limited to the senior boys.

The junior girls watched too!

In junior year, we were considered upperclassmen, but we weren’t top dogs just yet. The juniors were all responsible for learning the hazing material of the seniors. Now there existed many perks involved in a junior’s status. You received access to all of the tests that professors reused. The girls would put the corrected ones in a pile for us to look through and we would have the correct answers to the test. We had to follow the seniors around though, like little interns. We were legitimately like their secretaries. It was such a strong culture of dominance and chain of command. Sometimes the seniors made us talk noted.

The best part was that we got to watch the hazing of the other girls so that we knew exactly how to play it and how not to end up caught! I couldn’t have any prude mom organizations ruining all of our fun or the future fun of the sorority because some bitch ended up way too drunk and fell down the stairs or some shit. I had to admit, I began to understand why this was such a tradition. It was so inexplicably hot to watch these girls lined up naked and in rows. Desperate for admittance an intimidated and scared. I loved watching the head girl just rip them apart for a tiny little mistake. It turned me on to watch them experience the punishment.

It seemed like all the other junior girls were just squirming around in their panties too. They watched so closely and so excitedly. They too appeared fascinated and fueled by it. This greed for power. Finally, the day came when I became a senior. I could not wait. I invested so much into those in those power-filled perks. Finally, it was my turn to degrade a little bitch of my own. I walked into the basement as we always did before one of the rituals. We assumed our positions. each assigned one girl and one guy. The idea was that if you tapped out from your paddling, the dude could fuck you however whenever and wherever for the fresh meat initiation.

For teen phone sex give me a call! Read more of my blogs to hear about fucking straight girls.