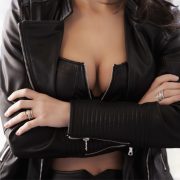 Every so often the frat houses on campus host one of their big parties, and that means it’s time for me to be one of those frat party sluts.

Although I know people like looking and enjoying frat party sluts, honestly, being one of those frat party sluts is the best thing ever. So when a frat house on campus decided to host a party that was invite-only, a few of my friends and I went to see about getting invites.

I mean, I’ve got nude girl game, so I expected someone to drop me a line. But no, they had a selective list, and we were not on it. But, my girlfriends explained to me, we could always sneak in the back, just like everyone else would do. It was more an official invite party so the university didn’t get mad at them.

Given the size of the kegs I saw the frat boys bringing into the house later that day, I began to believe it.

So, we ended up sneaking in through the back door. Honestly, I think anyone could’ve snuck in.

Soon, different guys surrounded us. Irene ground back on one guy, practically fucking him through her skirt. I took the hint and left. After all that dancing. I was pretty thirsty. So, I went to get a drink. And I think by now you know me well enough to know that when I have a drink, everything gets wild.

I’d remedy that. So, I downed a shot of vodka. Then, I pulled one guy‘s cock out of his pants and covered it in the shot. Although he gasped, he gave no complaints when I wrapped my mouth around that cock of his.

In fact, his friend loved the idea and imported some bourbon on his now exposed cock. Well, I’m not about to let some delicious liquor go to waste. Even though I was sucking vodka cock, I moved to lick up all the bourbon on his friend’s cock. By far, these were the best body shots that I ever had.

Well, I’m sure you can guess what happened next! Of course, more and more guys came in. Once they found out I’d be doing shots off their cocks, they assembled. Most of the liquor didn’t end up in me, sadly. Most guys were in such a hurry they poured most of the shots onto the floor, leaving me to lick fumes off their hard cocks.

Really, though, I didn’t mind. I made a show of sucking all those nice, hard cocks, letting them know I was the best of the frat party sluts there that night.

But the alcohol-fueled mood was to change!

Suddenly, one of the guys pulled out and came all over my face. The room went silent, all the guys waiting for me to react. Rather than get mad, I laughed and made a show of licking my fingers, my tongue, and my chin. The guy seemed relieved, and suddenly, I had twice as many dicks in front of my face as before.

When you’ve got so many cocks before you, how’s a girl to choose them all? Luckily, they were all patient enough to wait their turn. Actually, some of them just started stroking their dicks, no licking needed!

In the end, they were all very, very satisfied.

Want to hear about how I satisfied these men? Or maybe you want me to satisfy you through phone sex? Then you should call!! Don’t leave yourself hanging!