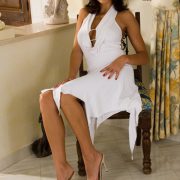 Forced Femme Crossdressing had never crossed my mind. Certainly not that day.  I had been lounging in my PJs one evening early last December. My fiancé Melissa was working 2nd shift rotation. When her best friend Dawn showed up at our front door. She invited herself in when I opened it. When Dawn and I are alone, she always teases me about my bisexual tendencies. It was my own fault for letting them slip one night when I had way too much to drink. Which Melissa had gotten me to talk about how sexy my boss is. And how I had always wanted to try sex with a guy but was too scared to. And she got it all on video. So, I was wondering what she would try this time. She was dressed to kill, in a low-cut, skin-tight, mini dress.

And she wasted no time showing me what I was in for to. As soon as the front door was shut, she grabbed my cock! This was way beyond anything she’d done before!

I did not really process what she said. She was grinning at me and rhythmically squeezing my cock through my pants. I was definitely hard and had always fantasied about fucking her. Not knowing what game she was playing. I was afraid I wouldn’t be able to control myself. But I reached for her anyway. She immediately fended my grasp with one hand. And dropped a bag on the floor in the process. She grabbed my hands pressing them against the sides of her hips. Then she raised my hands so they slid up the sides of her body.

“I’ve got something for you to do,” she said with a naughty grin. Then she put my hands back to my side and picked up the bag. She still had this sly sexy smile. Then out of the bag, she pulled a dress.  For a second, I was confused. Then my jaw dropped as I realized she meant for me to wear it. That she wanted to do Forced Femme Crossdressing with me.

“It’ll be fun just to see what it looks like on you!”

She had me sitting on the couch. Then she had some black full back panties from her bag and she started putting them on me.  I couldn’t deny that the silky feeling against my skin was so erotic. ” Forced Femme Crossdressing OHHH!!! This will be great, you will love it you’ll see,” she added. Next was a matching black bra which she quickly added some fake silicone breasts in. Then she put the dress over my head. It was black long sleeved and obviously made to cling to the hips and drape over the breasts. Then she pulled thigh-high stockings and some high-heels out of the bag and proceeded to put them on me.

“I got your sizes from Melissa so I could buy you clothes for Christmas,” she said with a giggle. Then she pulled me to standing and pulled and adjusted the dress.  That is when she pulled a wig of long blond hair out of her bag and soon had it on my head.

she said “Just a little bit of makeup, and you’ll be perfect!” I hate to say it but it is true I have a feminine face. I knew that I would have no trouble passing as a woman. She put a bit of makeup on my face. When I looked in the mirror, I hardly recognized myself! Then Dawn wanted me to try the shoes, practicing walking back and forth. In a little while, I was doing pretty good.

In fact, that is how we spent the next hours. Dawn coaching me on walking and movement. Then she had me just stand in the middle of the room. She went around behind me and reached around my body letting her hands roam over the silkiness. Her hand drifted to my cock. Which had stayed hard as a rock, sticking a straight out, the entire time I was learning to walk in the heels. So of course, I just stood there waiting to see what she had in mind next. “Is this Forced Femme Crossdressing?” I wondered again as,

Her hand went down to my cock and rubbed it.

She started lifting the dress off me, and soon had it and my bra off.  She told me to step out of the shoes. Then she pulled the panties and stockings down to my ankles telling me to step out of them. And she lifted the wig off my head. Then with her body pressed against my back, her breath on my nude skin, she reached around and stroked my cock. She in long slow strokes, until it was leaking precum in steady drips.

“Just a minute,” my body trembled as I felt and heard her murmur. “Close your eyes.” And I felt her warm body lose contact with mine. I trembled harder in anticipation. Then I heard the front door and I realized she was gone! Shocked I looked around immediately.

One Reply to “My first Forced Femme Crossdressing experience with Dawn”