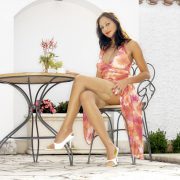 It was with her, Dawn, that I first experienced Forced Femme Crossdressing. I had been staying with Dawn while taking some vacation time. With all the new feelings, desires, I needed time away from work and my fiancé, Melissa. That night, when Dawn got home, she changed me to another sexy outfit and was really careful with my makeup. That is when Dawn told me we were going out to a bar. “No way,” was my automatic response. She told me I would be proud because before the night was over, I was going to be a crossdresser getting a blowjob by a woman. I still tried to refuse.

I should have known better, there was no stopping her. Soon we were downtown, sitting at a table, drinking beers when in walks Melissa. I almost choked. Dawn waved to get her attention and soon I realized that Dawn had set this up. She introduced me to Melissa as Anna and sat there and grinned. I tried to keep Melissa from getting a good look at my eyes. But even when I gave up trying, she didn’t show the slightest sign of recognition. We had a few more beers. Finally, Dawn said: “Guess what.”  She was talking to Melissa. “What?”

“Stop it!” Obviously, Melissa took it as a joke. She looked at me a little.

“What do you think?” asked Dawn. Melissa looked closely at me. Yet she showed no sign of recognition.

“No, you’re not,” returned Dawn, laughing. Melissa stayed. I think she let Dawn push her around. There was an awkward silence. Melissa looked nervous.

“She likes to have her cock sucked,” Dawn said talking to Melissa! “Take her out back and do it.” She stood up and pulled Melissa up and brought her over and put my hand in hers. We stood there. “Go!” Melissa pulled and I stood up. “Take off all your clothes and kneel in front of her.” She was still talking to Melissa! “And put these on, behind your back.” She handed Melissa a pair of handcuffs!

And Melissa did it. She led me out back and into a dark corner. She had everything off in seconds, and knelt in front of me and lifted my dress and pulled my cock over the top of my panties. I couldn’t believe it. She didn’t say anything. She just did it, exactly like Dawn told her to. Then she put the handcuffs on one wrist, handed me the key, and stood and turned around with her hands behind her so I could fasten the other wrist. As soon as I did, she was on her knees again and had my cock in her mouth.

I couldn’t believe it!