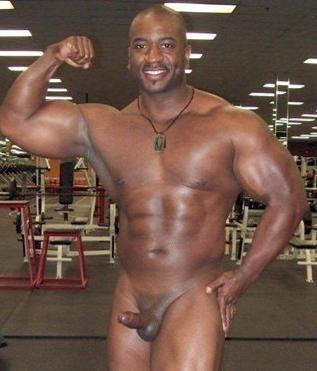 Last week I was left in the back room of the bar I work at, pointing and giggling at this HUGE muscular black jock – with a little teeny weenie! Those of you that know me know I would never allow that little baby cock inside any of my perfect little fuck holes! A cock THAT small is only good for one thing – humiliation! But I thought to myself, “this is the perfect guy for a little forced bi fun!” I mean, just because I can’t have any fun with him doesn’t mean Davon can’t! =)

I finally stopped laughing long enough to tell him that his was definitely the smallest black cock I’ve ever seen! And that it didn’t deserve to be inside me. He bowed his head and mumbled some sort of meek reply. The Inspiration hit me, and I excused myself momentarily. Came back from my locker with a tiny bit of material in my right hand. I opened it up and showed both Davon and the SBC slut a teeny tiny black pair of thongs. I threw them at our new friend and told him his sissy slut training was about to begin! “Put those on!” I commanded curtly, then teasingly added “teeny tiny thongs for an itty bitty teeny weenie!“

Davon snickered and if possible, that small black cock shriveled up even more! But he put on the panties as I instructed. His balls were bulging out of the bottom of the leg holes, but that tiny dick fit perfectly inside those lacy little thongs! Walked a slow circle around him, laughing softly the whole time, whispering to him about his pathetic cock and how because of it. He was going to have a forced bi session with a REAL man with a big black cock! I squeezed his little package hard and he made a face. Which made both Davon and I snicker again.

I pushed him down on his knees and walked him over to Davon, whose long, thick, hard ebony cock was sticking straight out in front of him. I put the Vulcan death grip on the back of his neck and hissed at him, “suck it, bitch boy!” He resisted at first, of course. But once I tightened my already vise-like grip on the back of his neck, he gave in and let that big chocolate dick slide right past his lips! I giggled with glee, forcing his face further down onto it, gagging him. (that always makes Davon’s eyes roll back in his head!)

I giggled and taunted about what a good little cocksucker he was, and how I didn’t think this was the FIRST time he’d had a big fat dick in his mouth! He tried to protest, but I hissed at him to shut up, be a good little panty boy, and suck that big fat dick until it shot a big fat creamy surprise right down his throat! He bucked on me and tried to get away then, obviously distressed at the idea of swallowing a big fat cum load! But there was no getting away. When forced bi action is what I want? Forced bi action is what I get!

Call me and I’ll give you every last detail about how we made that little SBC faggot choke down his first hot load of spunk! AND everything else we did to him that night! =)