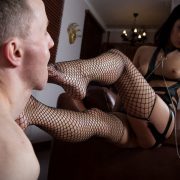 The Boss’s Son Has A Secret Fetish

During the summer, the boss’s college-age son always works in the office where I do. We don’t really deal with the public much, so dress in our office is fairly casual. I like a lot of strappy sandals in the summer since it’s cooler and feels nice. It quite surprised me when after work the boss’s son asked me if I’d like to make some extra money. I asked him how and he said he wanted to be my foot slave. I didn’t think he was serious, but he was. So began my foot fetish story with the boss’s son.

It Was Harmless And It Really Turned Him On

He said he’d be willing to give me a couple of hundred a week. Just to kiss, lick and worship my feet and have access to my shoes to sniff. He also asked if I’d watch him masturbate, but I didn’t need to help in any way. And He said at no time would he ejaculate on my shoes or touch his privates with them. He only wanted to smell them and touch them. I was in shock. I didn’t know what to say. He didn’t want me to get him off, he wasn’t asking for anything really gross, so I said sure. I wanted the money, and it seemed harmless enough. He said he’d watched me come in daily in all my pretty sandals. He’d observed my feet and was very attracted to them and wanted to get close to them.

He Sucked Each Toe All-Around

He asked if he had permission to kiss and lick them now and I said that was fine. So I sat in my chair. He knelt in front of me and began sucking them and rubbing them. He began sucking on my toes and running his tongue between them. It kind of tickled, but I didn’t mind it. I could see the bulge in his pants was getting larger and it turned him was on.

I asked him if he wanted to jerk off and he nodded his head. He undid his pants and got out his hard cock and began to slowly stroke it up and down. I kept my foot over his nose and mouth for him to smell. I could hear him inhale deeply as he took in their scent. It was the end of the day, so they would hardly be out of the shower fresh. He seemed to prefer that for sure.

He Loved The Scent Of My Different shoes

This went on a few times a week. One night he came over and sat in my closet with my shoes all around him, smelling them all. He seemed to gravitate towards an old pair of bedroom slippers that had seen better days. A pair of clogs, Also, a pair of leather ankle boots I wore a lot. I sat on the edge of the bed watching him stroke his cock and smell them all one after the other. It was fascinating oddly. He was quiet and didn’t bother me when he visited. He always left some cash when he was finished, and nothing but my feet touched him. And He just wanted to suck on them a bit or lick and kiss them.

I wondered what his father, my boss, would have to say about the entire affair. Not much I’d think. This foot fetish story would not have pleased the old man one bit. He was a pretty straight arrow. He never asked for a foot job, though I’d bet he’d have loved to but didn’t wish to overstep. And He even bought me some lovely shoes, which I’d not expected or asked for. He knew my style and size from having thoroughly gone over my shoe collection. I’d never earned money so easily as letting him fawn over my feet. He just wanted to kiss and lick them a few times a week. It was a good side gig, I must say!

He Liked Me Barefoot As Well Asa Stockinged Feet

He had a decent-sized cock, and I can’t say I minded watching him jerk off. And He loved to slowly build up his load and tease himself. I’d never watched anyone masturbate so intensely before like this one. He had a true love and admiration for all things foot and shoe. He seemed to have a stocking fetish as well. Especially fishnet stockings. He gave me some incredible foot rubs as well as paying me. I truly believe they gave him as much pleasure as they did me. No one ever found out about our little arrangement, and it’s just as well. My little foot fetish story with the son of the boss continues in secret to this day.

I love the kinkiest fetishes. Call me  for fetish phonesex