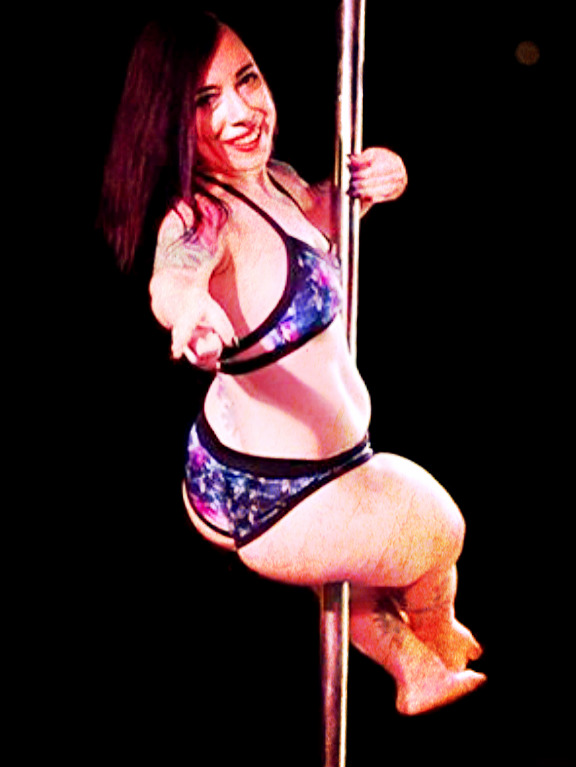 Fantasy sex stories and how I make them happen for Michael.

Like most men, Michael has a lot of fantasy sex stories that he dreams about. My job as a girlfriend is to make sure he is sexually satisfied. Focusing on his fantasy sex stories I vow I will do everything in my power to fulfill them for him. I want to make his fantasy sex stories and make them reality sex stories.
Ever since I’ve known him, he talked about love for midgets. It is a dream of his to have sex with one. There is a girl that we saw one night performing at the dirty show. A midget stripper/pole dancer that performs to heavy metal. Did I mention that Michael is a fan of heavy metal also? He is. 2 of his loves in 1 show. How perfect is that?

We talked to her for a few and he got his picture taken with her. He was in heaven. That’s all he has talked about for a year. I read that she was doing a benefit pole dance show about 5 hours from us. Road trip! We went and saw her perform. Like always she was amazing.

Last week I received a text from Michael with a flyer attached to it. She was going to be 2 1/2 hours from us at a strip club. I knew he wanted to go. He also knew I worked my other job that Saturday so there was no second thought in his mind. Making calls and searching the internet I got the showtimes and booked a room. Everything was complete, I even snuck a change of clothes out of his house for him. He is clueless about what was being planned for him.

Informing him that we were going to the bar, he needed to be ready to pick me up at 7 pm he still had no clue that one of his fantasy sex stories was going to come true. A half-hour into the trip he asked where are we going? It was about time!

I told him and his look was priceless. Arriving at the strip club right before the first show I was a little nervous. I have a confession~ I have never been to a strip club before. Yes, I was breaking my strip club virginity.
She began her performance. She is truly an amazing dancer. Pulling Michael up on stage was the highlight of my strip club experience. At last call, we hung around to introduce ourselves to her. Talking with her about her experiences while learning how she got into the business was so interesting. Inviting us back to her hotel room for a few drinks we accepted.

When I get a few drinks in me I turn into a blabbermouth and that was no different tonight.

I told her all about his fantasy sex stories and how she was one of them. To my surprise, she asked me if I cared if she fucked him. She is making my job to please him so much easier, I didn’t even have to try this time. Of course, you can! Looking over at him she told him to undress and get on the bed. He did exactly that. She began to suck his already hard throbbing cock. He was so hard while watching her get on all 4s preparing to get fucked doggy style.

The look of pleasure in his eyes from this girl, from me fulfilling one of his fantasy sex stories was worth everything. She might appear again in a lesbian sex story in the near future. I have some crazy sex stories I want to share with you. I am just a phone call away from some juicy phone sex.