Exhibitionist Story; Putting On A Show For Him Turned Me On 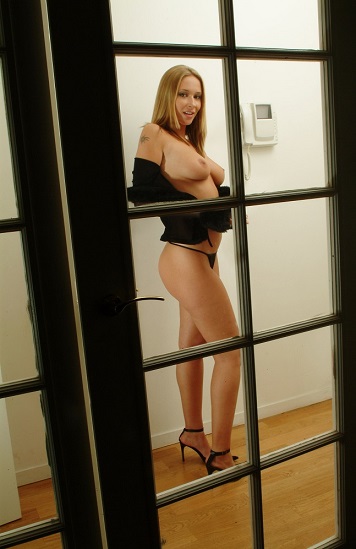 I have a hot exhibitionist story I lived for real recently. I started to get these phone calls from a strange man that told me he watches me through the window. Now I live in a high rise and there’s also one directly across from me. I did not know what unit they might be in. If they had a telescope, it could be anyone. It kind of made me mad at first, but then I kind of liked the idea someone was spying on me. Means I was interesting and pretty enough to capture their attention. I did little stripteases in front of the bedroom window with my lights on. I got a call telling me he was enjoying watching me shake my ass. And then I twerked for him and put on a show. It didn’t even occur to me that there could be blackmail sex forced on me.

We Got Off Together

He said it made his cock really hard to watch me parade around like some slut on display. He knew he was a stranger, yet I was entertaining him anyway. I guess I was a slut at heart. He started talking sexy and I knew I was getting wet. He told me he could hear me getting wet and told me to touch myself. I did. I was wet and turned on. This exhibitionist story was about to get even hotter. We masturbated together on the phone as he watched me through his window. I did not know who this man was, yet I was getting off with him.

It Was Risky But I Couldn’t Resist

It wasn’t long after when he said he wanted to fuck me for real. I had to admit he was hot on the phone.It was risky but I couldn’t resist. I would put on some sexy lingerie and pose in front of my bedroom window waiting for his call. He asked if he could come over and we could fuck. I said I was willing to meet to see if we had chemistry in person. He took that and said that was good enough for a start. So,He came over and I had to admit; he was as sexy as his voice. I invited him in and poured us some drinks. It didn’t take long until we were kissing on the sofa, his hand rubbing my pussy over my panties.

Anyone Could Be Watching Us

I knew I was wet for him, and he commented on it as well. He fingered my pussy and teased my clit with his skillful fingers. I was bucking against his hand. He led me to my bedroom and said he wanted to fuck me in front of the window. He said if anyone was watching us, it would turn him on tremendously. I liked the idea we might be watched by someone as well. I bent over and grabbed my ankles with my hands, and he fucked me from behind. Anyone watching certainly would have gotten an excellent view of what we were doing. If they had been watching with a telescope or binoculars, they’d have seen close up.

We Were Really Getting Into It

I could feel his cock sliding in and out of me from behind. My tits were shaking wildly with every thrust. I could actually feel some of my wetness dripping down the insides of my thighs as he fucked me. He reached around and rubbed my clit as he pounded my pussy. It turned me on. I just hoped someone was watching us. Both of us totally naked, right against the glass. I squeezed my cunt muscles around his dick, milking him into me. He spanked my ass a few times, making my skin smart. It made me cry out. He continued to rub my clit, smearing my copious wetness over my swollen clit. I knew I was about to explode on his cock.

We Were Both Exhibitionists

He pulled out and even more ran out of me. He said it was fun and he’d enjoyed it a lot. And He left soon after and said he’d call me in a few days. No idea if he will or not, but it was one hot fuck. So sometimes an exhibitionist story can have a hot ending like mine did. Now I keep wondering who if anyone saw us, and if they might call me, that might be interesting.

I Love being a freak and I do the very best phone sex!