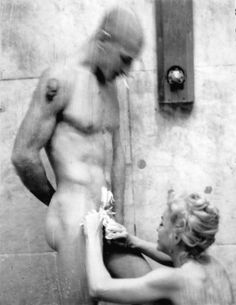 Why can’t men embrace being clean shaven down below like women have? I’m not a big fan of pubic hair on women which is why I always keep my pussy nice and smooth and men should be neatly trimmed or smooth. No one should ever have a big hairy bush, it just makes the situation more appetizing. Pat didn’t get that memo and there was no way I was going to fuck him after I saw the forest that he had growing. Believe me, it was wild, I could barely see his cock. Sex screeched to a halt and I dragged his ass into the bathroom. Shaving was the only option.

“Stand there.” I told him and went through the medicine cabinet, taking out some shaving cream and a razor. I grabbed a facecloth and warmed it under the tap then held it on him, softening the hair up. I then put some shaving cream on my palm and spread it over him. He shivered as I touched him and I told him to keep still. I picked up the razor and held his dick steady with the other. As soon as my warm soft hand covered him he said that this could wait but I just ignored him. I could feel him throbbing and twitching in my hand and knew he must have been dying to fuck me. I swept the razor over him in a careful stroke, shaving the hair off him and leaving behind smoothness. I moved slowly, going across him patch by patch. His dick kept moving in my hand and I held it tighter, making him groan. “You have no idea how good that feels.” he told me but I had a pretty good idea. When I had gotten the last bit of hair off him I wet the facecloth again and wiped him clean. I wanted to encourage him to do this on his own from now on so whenever we hooked up we could get straight to the sex so I said to him “Mmm, I love it when guys are smooth. It makes me happy which means you get to be happy too.” I stroked his dick then moved my hand to his base. I licked along his shaft and around the head, lapping up the pre-cum that was leaking out of his slit. I put my lips around his head and slowly slid down his shaft. I began to suck him and the smell of the shaving cream filled my nose. I reached up with one hand and cupped his balls. They hot and heavy, probably feeling like they were about to burst after having be made to wait for so long. I gently squeezed his balls as I sucked and I could hear him moaning above me. I went a bit faster, my lips sliding down his shaft and felt his balls jerk up in my hands. I relaxed my throat as he started to cum and I managed to swallow every drop of it.