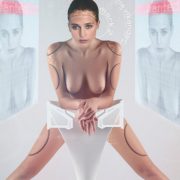 As a chief droid in the Resuscitation and Revitalization division of human specimens, my spaceship held one of the largest inventories of cryogenically frozen human assets in the universe. The work my department did in particular was thrilling. My responsibilities were to visually assess the specimen’s viability, potential and toxicity levels.

Our android species ruled the universe.  Perhaps as a last instinctual trait, we had designed ourselves to carry the physical appearance of our primordial ancestors. Droids were assigned genders. Personally, I carried the appearance and traits of an attractive twenty six year old female droid two slim legs, voluptuous breasts, a small waist and long eyelashes that batted at specific time intervals.

It was the first time I caught myself straying from my programmed behavior. I read through stories of male and female organs.  Explosions of pleasure often accompanied by streams of hot, creamy substances.

Much to my bewilderment, I felt something odd occur between my robotic female sex organs. It felt like a pleasurable tingling of some sort, one which I couldn’t understand.

The first two cases were easy. A male tech CEO, victim of a motorcycle accident, had no viable attributes other than a supreme IQ. My team would harvest its brain and any salvageable sperm. Then a female shell came through with no suitable eggs, which facilitated her classification. My team would need to discard her.

Then I spotted the next specimen.  A 30 year-old attractive male human. The human was most definitely athletic. His pectoral and bicep muscles were practically carved in marble. His hair was the color of hay. Suddenly, my eyelashes broke their programmed frequency and fluttered more rapidly.

The male specimen’s sex organ was of gigantic proportions, unlike any other I had encountered before. Behind his member were two testes, bigger than any I’d seen in all my years on the floor.

The tingling sensation between my android sex organs jolted. A warm feeling took over me. The rules were strict about this, I was to send any healthy human specimen to the lab for immediate observation. However I couldn’t help but want to keep him here, with me, and for me.

So I decided to go against protocol and pressed the switch that would begin the unfreezing process. Drops of water formed on the glass pod as I began to feel warmer and warmer.