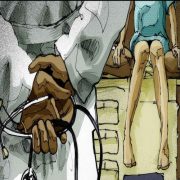 He told me to show him what I had been doing, so I reached down and fingered myself.

After, he shook his head and informed me that I was going about it all wrong. Then, he grabbed a mirror from one of his drawers and told me to hold it between my legs, so I did. He began playing with my clit using some sort of doctor prescribed masturbation technique.  Stimulating my vulva and the hood. Stroking the internal stems of my clit, then circling my clit. Then, he stroked my clit while slowly sliding one finger in the opening and just stimulating the first two inches of my pussy. He slid it in and out, going no deeper than two inches each thrust. I felt the build. My whole pussy started to tingle. Then, he slid another finger in and increased the two inches, to three.

This became a sort of consistent action.