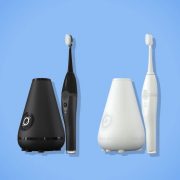 Who would have known that a naughty teen girl’s electric toothbrush would pave the way for so much self-discovery? One day, after being left viciously unsatisfied by my boyfriend, I left to visit the bathroom. I thought about how long it would take me to finish myself off compared to how long it would take him to question the time that I had been missing in the bathroom. He had such a tiny cock and was just garbage at sex. Not very experienced at all. No fun! Every time we fucked, I was left feeling even less satisfied than before. One day, he came over to my house, and as usual, we fucked for like an hour. He ran track, so despite his tiny cock, he had a lot of stamina.

Getting jackhammered with a little three-inch teeny weenie for an hour sucked. My electric toothbrush served me better. So afterward, I would practice a  little self-soothing. I slid my hand right into my panties, under my skirt, and I would rub my little clit until I felt delighted. Not that he ever even asked or cared if I was. So, like clockwork, after every fuck session, I would visit the restroom and play with myself. We were at my house, this particular fuck-sesh. I scurried off to the bathroom, filled with his seed. It ran down my leg. My eyes darted around to make somehow the scene more romantic. Frantic. Desperate. Rushed. My eyes rested on the electric toothbrush.

But vibration! It dawned on me. I had to cover my ass, so I shouted that I would brush my teeth for a minute. The electric toothbrush called to me. I heard him mutter some sort of ok, and I grabbed the toothbrush. I turned it on and touched the vibrating bristles to my hand with a renewed appreciation. It was one of those supersonic fancy ones too. I had braces, so the dentist insisted to my parents that we needed it despite the price. Over a hundred bucks for a toothbrush. And it was well worth it for several reasons. I spread my legs and spread my lips with my left hand.

Way harder, standing up. I sat at the edge of the tub and touched the vibrating bristles to my clit, oh so gently. Then, I began to brush my clit up and down, not unlike brushing my teeth. I took comfort in the fact that it probably sounded the same. The same rhythm. I felt it grow tingly all over the little bulb of my clit. I could hear him growing restless in my room—footsteps around the floor. Then, I pressed down a little harder. The bristles were so sensory, but the electric toothbrush was a little too soft! Still, I knew that it would get the job done much faster than my hand would. I started to move it in circles. That seemed to do the trick.

It brought me right up there.