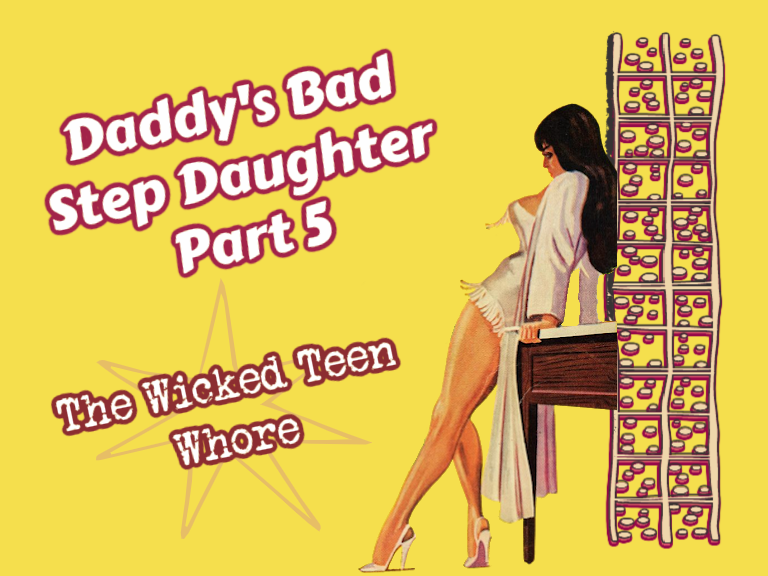 Feeling very cunning, I quietly opened the door to her room, slipped in, and closed the door behind me. I positioned myself in a chair that was positioned in a way that would prevent her from seeing me until she was all the way in the room.

I knew that she usually took forever in the shower; therefore, I looked for something to entertain myself while I waited.

She Wasn’t The Smartest Girl.

My eyes landed on her cell phone. “Do I dare take a look,” I thought? But of course, I dared – she was a wicked teen whore who needed a lot of money. I could do whatever I wanted.

The first pin I tried to unlock her phone worked – her birthday. I never said she was the smartest girl. But as I started looking at her pictures, I realized that she was definitely one of the sluttiest. A true wicked teen whore.

There were a lot of hot pictures of her but no outright nudity. A lot of cleavages, short skirts showed the round, perky bottom of her wicked teen whore ass and lots of lingerie pics. “Where did she get all of those thigh highs?

Most of the pictures were mirror selfies, but some appeared to have been taken by a second person. I wondered who that might be and also who she was sending these pictures to. I had started to open her texts to find out when I heard the shower turn off, soon followed by my wicked teen whore walking down the hall toward her room.

Yes, It Was Overly Dramatic…

I had turned the light off, knowing that she would close the door and cross the room away from me to turn on a lamp. I wanted her to suddenly see me sitting in her room scrolling through her phone as soon as there was enough light in the room, which was exactly what happened. Except it was even better.

My wicked teen whore gave the cutest little shriek. And the towel she was wearing slipped a bit, exposing her perfect breasts. The perfection that only a teen girl can have. She immediately tried to cover herself but froze in place before she could do so.

I had commanded that she stop and to leave the towel just like it was. I said this in the most dominant tone that I could muster. And I pulled it off. But truthfully, I was shocked that my wicked teen whore did what I said, even though I tried to hide it.

What do you think? Will the wicked teen whore keep her tits out? Will Step Dad grope them? Let me know what you think in the comments below!   Not sure what’s going on here? Worry not… head to part one of our bad step daughter story!