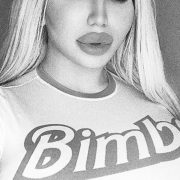 I used to be a good girl, I bet you can’t believe that though.

I joke sometimes that I haven’t actually had any plastic surgery.

So I did and the doctor suggested I get a job as a phone sex operator. Yes, it seemed a little unconventional at the time but he made great points about how this would only benefit my cravings for sexual gratification as well as simplify my endless cravings for cock.

I started selling dirty panties to pay my bills, stripping at the club, and doing phone sex.

It’s really hard to hold down a traditional job when you’re this far gone the rabbit hole. After I uncovered exactly what was going on with me, I attempted to play it vanilla and be undercover. Soon enough it became clear that my days as a Sunday school teacher were long over and that I wouldn’t be working at the grocery store check-out ever again.

Did you ever have a “field day” at school when you were younger? Picture that but it’s the Battle Of The Bimbos: Blondes vs Brunettes. Naturally, I am the team captain of The Blondes and I have been putting my girls through rigorous slut training. Unsurprisingly, I’ve never once heard any of my girls complain about the tasks required as a part of their practice tasks.