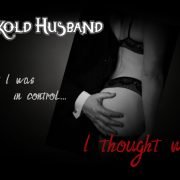 I undid the buttons of his shirt, working my way done. As I parted the edges, my hands slid up his torso. When I reached his shoulders, I pushed the soft material off, letting it fall to the ground. Next, I slid to my knees, working one shoe and the sock off, then the matching set off the other foot.

My face was scant inches from his crotch, and the bulge there was more than impressive – it was downright daunting

After a quick glance up at him, I returned to my task at hand, first undoing the silver button, then pulling the zipper down slowly. Grasping the waistband at his hips, I pulled both his jeans and his boxer briefs down to his ankles with one swift motion.  Pulling at one calf, then the other I removed the last of his clothes.

I let my eyes drink him in, pausing at the intimidating size and girth of his cock. After an audible gulp, I forced my eyes to continue up, finally meeting his gaze. He was looking back at me as if he had been studying me intently taking in all I had done.

His hand went to under my chin, lifting it, and he smiled, letting me know I had pleased him. It made me giggle inside, happy that I had pleased him – what the hell was that?? That was not me. I don’t react like some insipid school girl, gauging my worth by the reaction of a man. But there it was, I wanted, even needed to please this man. Ugggh… I was turning into one of those girls.

Antonio grasped my chin harsh, turning my head to him, forcing my eyes to lock with his.

He took a moment, then simply told me to suck his cock. I licked my lips without thought as I grabbed his thick cock with one hand, and nestled his balls in the palm of my other hand. Then I drew my tongue over the crest, and the slit of his throbbing cock.

Just when I thought I was going to be able to taste him coming down my throat, he pulled me up by my shoulders. He tossed me on the bed like I weighed nothing, and growled something about it being his turn.

I was in a haze of need, and I would have agreed to anything at that point. That’s when I shook my head in capitulation, and he just grinned back at me. I swear, there was this wicked glint in his eye as if I had fallen straight into his trap.

He started to devour my pussy, pressing and circling my sensitive clit with his thumb, and his tongue. All the while his fingers were pounding in and out of my pussy. I even felt him slide one finger into my tight sphincter, adding to the insane mix of sensations.

I was on overload, and there was no way to halt the tidal wave of an orgasm that was guaranteed to explode in seconds. It was all-consuming, pulled from the very depths of my soul.  There was no stopping in, and truth be told, I didn’t want to.