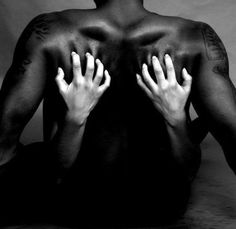 We go through each outfit, discussing the pros and cons. In the end, it all comes down to one question, though: Do you think that the Black men will like this one? Eventually, we decide on a short skirt (with no panties, naturally), and a low-cut top, one which shows off the black spade tattoo on her left breast, just above her heart, the one which signals her availability to any Black man who might see it. As she does her hair, I help paint her toes, a provocative shade of crimson. She does her nails, and I help her apply her make-up. Then she rolls her stockings up her legs, and I slip the strappy “fuck me” shoes onto her feet.

She takes a step back, and asks how she looks. Beautiful, of course. She smiles, then gives me a gentle kiss, telling me to wait up for her. And then, she’s gone…

I wait up for her, of course I do. I keep myself busy, cleaning the apartment, doing a little vacuuming, starting a load of laundry. About half an hour later, my phone buzzes. A message from her. A picture of her, with her arm outstretched so she can capture the image: her, dancing at the club, sandwiched between two large, muscular Black men. “Hey bby. havin a gr8 time.” I smile, and set down the phone. If not for the fact that my cock is locked in this metal cage, I know that my cuckold cock would be hard right now.

Less than ten minutes later, my phone buzzes again. Another picture from her. This time… this time, she’s in the bathroom, down on her knees. Someone else had to take the picture, as both her hands are occupied, wrapped around a pair of Black dicks, with one more in her mouth, swallowing it almost halfway down. No words with this one, but, then again, words are hardly needed. I smile, heart beating faster already, waiting for the next message. And a minute later, here it is. She’s bent over in a stall, one of the men pounding her from behind. A minute later, a text: “Black men fuck u so much harder when u say ur not on the pill.” That’s right. She stopped taking her birth control a couple weeks ago. It should have cleared her system by now. And, keeping track of her cycles, she should be ovulating.

There are a few more pictures over the next half an hour, all of them of her being fucked by different Black men. Are any of them the same men? I don’t know. But there are at least three of them, all taking turns with her. After several minutes of silence, one last message: “Coming home. bringing some friends.” She’s bringing some of them home? I’ll have to get things ready, then…