Trying a Different Kind of Ass Beating for My Slave With Corporal Punishment Play! 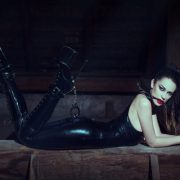 I wanted to have a bit of fun with corporal punishment play this weekend.

As I am new to roleplay in my actual life, I was excited to set the scene and delve into some corporal punishment play. I certainly possessed the tools for some corporal punishment play. I created a new rule, knowing that she would, indeed, forget. At least the first time. My rule was that when she entered my apartment, I expected to see her up in my bedroom. I expected her to strip down to her panties and kneel by the side of the bed for my invasive gaze. Hands had to be interlaced behind her back, waiting for instruction. She came over, as expected, and forgot to remain in her pose, as expected. I rose and walked over to my toys silently.

She pouted a bit because she thought I was ignoring her. Quite the contrary, she was about to receive a whole lot of attention. I picked up my beautiful cane and a couple of other toys along the way. She saw me rifling through the toys, so she knew she was going to get it. She realized the mistake she made, but far too late. Quickly, she began undressing, but I ordered her to freeze and redress. She did as she was told. I ordered her to stand by the edge of the bed. Then, I ordered her to place her hands on the bed. She did as she was told. She looked absolutely shocked, a look that I have really come to enjoy.

I stepped behind her.

“Strip,” I said. She hastily began to strip, and I snapped at her. “Not like that. Put your clothes back on.” She did as she was told again. Then she froze, awaiting instruction. I told her, “Now, do it again, but much, much slower.” Slowly, she stripped off her top, then her bra, then her skirt, and lastly, she removed her panties. Real slow as requested. A full twenty-minute undressing session. I took my cane and used it to press her legs apart. “Spread,” I said. She obeyed. I took my sweet ass time touching her and feeling every inch of her. Running my hands up and down her legs, then dragging my manicured nails all up to her back and ass cheeks.

She kept asking what I was going to do to her, so I gagged her and pushed her torso down onto the bed. I pulled her hands back and handcuffed her. She tried to bring her knees together, but I spread her legs further apart with my feet. “What do you think you are doing? Are you being disobedient?”  I asked. She shook her head, and I pressed it into the bed. “Did you make a mistake?” I asked. She nodded as I poured lube all over her ass. I lined up a rather sizable butt plug and pressed it into her. I could hear the fear and shock in her gasp. “What are you going to remember next time?” I asked. She mumbled something behind the gag with drool pooling out of her mouth.

For fetish phone sex, give me a call! Read more of my blogs for my second hazefest!