College Stories; I Needed The Money And He Needed It Hardcore 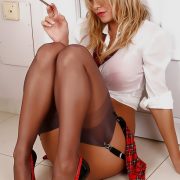 Those of us that went to college all have some crazy college stories, but some crazier than others. Like most students, I was always short of money when I was in school. I was lamenting this to a friend of mine and she asked me if I’d like in on something good. It had to remain private though. I was desperate, I’d have done nearly anything. She said a professor of hers gave her money, several girls money, for sexually dominating him. I was shocked but was open to anything at this point. I wondered what he might like, she said he was open to anything and everything. She actually
gave me sex lessons of the very kinky kind.

I Told Him To Get On His Hands And Knees

I put together the typical slutty schoolgirl uniform look, but I had a bag of tricks I took with me. One girl I was friends with had confided in me her boyfriend loved to take a strap on up the ass. I stopped at a sex shop on the way and got a few things, that among them. I went to his house and he loved my look when I arrived. And  I could see the bulge in his pants growing as I walked in. I told him to get on his hands and knees and crawl towards me. I lifted my foot and told him to lick the bottom of my shoe. He did so until he was told to stop.

I Told Him He’d Better Behave

I lit up a cigarette and smoked it while he knelt before me. And  I told him to open his mouth and I flicked some ashes into his mouth. He coughed a bit and I laughed. I told him to swallow them, which he did without question. I told him if he didn’t behave, I’d extinguish one on the tip of his cock. He promised to behave. This has always been one of my favorite college stories I tell people.

I Began To Slide Into Him

I commanded him to strip and get on all fours, which he did. And I then got the harness and strap on out of the bag I’d brought. His eyes grew wide as he saw me tightening the straps. It was an eight-inch toy, I told him I hope he could handle it. I got out the lube I’d brought, slathered some on and then grabbed him by the hips. I nestled the head of the toy between his butt cheeks until I felt the slight resistance of his asshole. And I then began to slide it into him. He let out a howl that startled me, but I just giggled and proceeded. I went slow at first, then picked up more speed. I asked him if his dick was hard. He reached underneath to feel it and proclaimed it was.

He Was Hard Again

I Told Him To Slurp It Up

Then I told him to slurp it up and swallow it. He seemed a bit hesitant, but I said it loudly and more firmly the second time. He did as he was told. It was an odd experience to be sure. I did this sort of thing with him several times over the coming months. It’s one of my more fun college stories I share with people.

I do all kinds of Phone sex No Limits