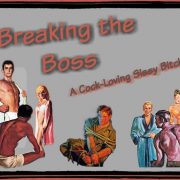 We had definitely thought of something.  Something amazing for us and horrible for boss-man while he was our captive sissy bitch.  Revenge.  Each of us would have plenty of time to get whatever revenge we wanted.  And not just us. Anyone in the office who wanted time with him could have it.

Brad looked every bit the stereotypical twink.  Young, with a perfect face, beautiful eyes and a killer smile.  His body wasn’t overly muscular but he was well-toned. He was definitely no stranger to the gym – just not obsessed with it.

Boss-man was especially awful to Brad.  He simultaneously mocked his sexual orientation and sexually harassed him.  Our boss was obviously the cliche homophobe who secretly wanted cock. He was ashamed of his desires and he took it out on the nearest openly gay target. Brad was more eager for a turn at boss-man than any of us so we let him go first.

I had always assumed that his looks meant that sexually he was submissive and a bottom.  But, I learned very quickly that appearances can be deceiving – at least in Brad’s case.  As he stood in front of our captive, I realized that he was definitely an alpha and most certainly a top.

I suppose that alpha-ness has less to do with one’s physical appearance but more with his character and psychological make-up.  I almost felt sorry for boss-man. Well, not really. But he was about to have quite a cock loving sissy bitch adventure!

We had decided to document these sessions on video.  I was in charge of filming.  Therefore, I witnessed the whole thing. And it was absolutely spectacular. As the day went on I saw him become very aggressive.  And more confident too.  This was not apparent in his work life but in this case, he was very impressive.

He started to yell…

The first thing Brad did was to remove boss-man’s ball gag.  He started to yell but Brad slapped him hard across the face.  This was very effective at shutting him up, which impressed me a lot.  He then released him from the chair but left him restrained with his hands behind his back and his ankles cuffed together.  I insisted that we also attach him to the metal pole with a thick chain secured tightly around his waist just to be safe.

I wondered what he was going to do with our cock loving sissy bitch now that he was mobile.  And I wasn’t surprised at all to see Brad shove him roughly to his knees onto the basement floor.   Then he walked up to boss-man, unzipped his pants and took out a huge cock. It was about 10 inches long and very thick.  Much larger than one would expect of such a beautiful and (usually) gentle guy.

Boss-man’s eyes widened in alarm and he started to protest.  He thought better of it, though and shut his mouth instead.  Brad’s enormous cock was right at his face level now and was semi-hard. He stood right in front of our cock loving sissy bitch and stroked his giant dick until it was rock hard about an inch from his face.

When it started dripping pre-cum he ordered our captive to stick his tongue out.  He initially refused until Brad made him obey by slapping him hard across the face again. Then he told him to lick it all up while he put his cock head right on boss-man’s tongue.

He did a pretty good job

Surprisingly, he obliged and did a pretty good job cleaning up all that pre-cum.  Then, Brad made boss-man open his mouth wide and pushed his big hard cock right into his mouth.  He initially resisted but had no choice but to submit when Brad used both hands to hold his head perfectly still.

He then started pushing his huge phallus into our little bitch’s throat until he gagged on it. When the gagging started he would hold it in place until it stopped.  Then he’d pull out, let boss-man gasp for air for about two seconds and push back down his throat again.

Next up – More of what Brad does to poor boss-man, I hope!

And if you want to talk about forced bi phone sex, need a bit of my own special brand of sex therapy or anything else just call me for the best phone sex you will ever have…