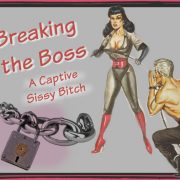 “Now that we have him, what are we going to do with our pissed off sissy bitch?  I’m sure we’ll think of something…”

Yes, we definitely thought of something.  Something amazing for us and horrible for boss-man while he was our captive sissy bitch.  Revenge. Each of us would have plenty of time to get their revenge. And not just us.  Anyone in the office who wanted time with him could have it. They all knew what was going on and 100% of them were on board with this.  And besides, he wasn’t going anywhere anytime soon.

Meanwhile back at the dungeon…

But before any of that delicious revenge could take place, we had one loose end to tie up.  Boss-man had a wife and we were sure she was wondering where he was by now. But maybe not. We had his cell phone and she hadn’t called once.  It was possible that he was as awful to Betty as he was to us. We needed to get in touch with her and instead of a dramatic ransom-type call, I decided to trust my instincts and just take a direct approach.

So, I just got in my car and drove to their house.  I’d been there many times before and endured his advances and harassment while poor Betty toiled in the kitchen.  When Betty answered the door I was confused and amused. . I knew exactly why she hadn’t phoned our captive sissy bitch.

This is that kind of story…

She answered the door in the skimpiest of sexy, see-through robes that perfectly showed off a pair of big, bouncy tits.  And behind her was a very handsome and EXTREMELY well-endowed African American gentleman in only his boxer briefs. Of course, there was, because this is that kind of captive sissy bitch story.

As soon as I was able to tear my eyes off of her luscious tits and his huge cock, I told her that we had her husband and that we intended to keep him as our captive sissy bitch for quite a while.  She didn’t even look distressed when I told her what my co-workers and I had done with her husband so far. Instead, she said, “that’s cool, you can keep him for all I care.”

She then started closing the door to get back to whatever that handsome-ass man was doing to her.  But then she changed her mind and said, “take me to him.” And then, “come on Darnell, we’re going to show my idiot husband what I’ve been up to while he’s been chasing women around his office.” Darnell put some pants on but Betty remained in her lingerie.

So many of us wanted a turn with boss-man that we were thinking of creating a sign-sheet.  Everyone had their own personal issues to “address” with him. However, it was only fair that his wife has the first turn.  She was probably the one who hated him the most. When we arrived at our little dungeon, our captive sissy bitch was just like I left him.

My accomplices hadn’t blindfolded him, though, and we could see his look of confusion and then anger when he saw Betty.  And he thrashed about more than he ever had since he became our captive sissy bitch when he saw Darnell. Did I mention that sexy, handsome Darnell was HIS boss?

Betty then described in great detail to boss-man how his small dick had always disgusted her.  And she went on to berate him for his speedy orgasms and his complete inability to please her. Then, of course, she told him what a huge cock Darnell had and how she lets him do whatever he wants to her.  She loves for him to use her and to be very aggressive and dominant with her. Basically, he was everything that boss-man was not physically and sexually.

This had been going on for quite a while…

Then to my great surprise and delight, Darnell pushed Betty down to her knees, unzipped his pants and took out his enormous, rock hard cock.  Betty automatically opened her mouth like a well-trained slut and Darnell quickly pushed himself roughly down her throat. This made Betty gag but she knew better than to pull back.  He held her head still and face fucked her as hard as he wanted.

Boss-man watched this in disbelief because he could count the times his wife had half-heartedly sucked his little dick.  And it appeared that his boss had been fucking his wife’s throat for quite a while, judging by how well she was able to take that impressive cock.

And if you want to talk about domination phone sex, need a bit of my own special brand of sex therapy or anything else just call me for the best phone sex you will ever have…