Breaking the Boss – A Pissed Off Sissy Bitch – Part 2 ♕ 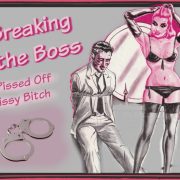 Kidnapping without his consent. That’s what our little sissy bitch of a boss was about to experience. AKA, pretty much what he put all of us through at one time or another. But, that’s the goal. How do you even begin making your boss your captive bitch? It’s a good thing that I’m an excellent project manager.  I really needed a plan. An amazing, foolproof plan that was just crazy enough to work!

The first thing I needed was some help. I proposed my plan to poor Emma the next day and she signed on immediately. I guess her frequent church attendance didn’t preclude her from a little revenge abduction. Good for her!

I also approached our office’s resident gorgeous, young twink named Brad. Our employer had been making his life a living hell since he started here. Not surprisingly, he was just as homophobic as he was sexist.

Second, we needed a secure place to store our captive who was sure to be a very pissed off sissy bitch. Fortunately, the basement of my house would be perfect. I know you’re visualizing a Silence of the Lambs style underground lair.  But this isn’t that kind of story. It was just a regular basement but it’s almost completely soundproof. And there’s lots of space to restrain an angry alpha man who’s used to getting his own way.

We dragged him down the stairs to his new home

We also needed a lot of supplies.  I gave Brad a list and sent him to the hardware store. Emma’s fiance, Gary met our obvious need for a large vehicle. He was just as enthusiastic about hurting the boss man as any of us.

Surprisingly, the actual kidnapping was the easiest part. I drugged the coffee of our soon to be pissed off sissy bitch.   When he was groggy enough, we led him right out the back door of the office to Gary’s van. By the time we got to my house, he was completely out so we just sort of dragged him down the stairs to his new home.

A new home for our pissed off sissy bitch

I had prepared the basement to be completely escape-proof – with reinforced doors, plenty of ways to restrain him and even more soundproofing. I was ready for him to be here for a long time. As long as is took to sufficiently break him, humiliate him, assault him and make him feel the shame that he made all of us feel.

While he was still unconscious, we stripped him naked and restrained him to a very heavy wooden chair. We chained both ankles to the chair legs and then cuffed his arms behind him.  Then we attached him to the chair which we locked to a post. Finally, we put a ball gag in his mouth and blindfolded him.

I couldn’t wait to see his look of fear

And then we had nothing else to do but wait for the pissed off sissy bitch to wake up. I was afraid that we would all get scared and regret what we had done. But that didn’t happen. If anything, we were getting more and more excited about confronting him as we waited. As for me, I couldn’t wait to see his look of fear when he realized he was trapped and was about to be put through absolute hell. Just like I felt in his office.

When he finally started waking up, our excitement level was at about maximum. Brad walked closer to kick his foot. Then he slapped him across the face with his hand. Wow, Brad really hates our boss!

We let him struggle for a little while before removing the blindfold. He seemed to have figured out pretty quickly that he wasn’t going to be able to move.   When he became still I removed it.

It was all worth it

It took a minute for him to adjust to the light, but when he was able to see we all finally got what we had been hoping for. The first look in his eyes was confusion. He had no idea where he was and why someone had tightly restrained him to a chair. Then he seemed to notice that he was completely naked and gagged.

He looked most confused when he realized that three of his direct reports and one guy he didn’t know were standing a few feet away and staring at him. But the transition of the look in his eyes that went from confusion to anger and then very quickly to fear was worth every bit of the trouble we went to.

Next up: Well… now that we have him, what are we going to do with him? I’m quite sure we’ll think of something.

And if you want to talk about being a sissy boy, need a bit of my own special brand of sex therapy or anything else just call me for the best phone sex you will ever have…