Some Cheerleader Ballbusting Should Have You Cringing in Sweet Sweet Humiliation! 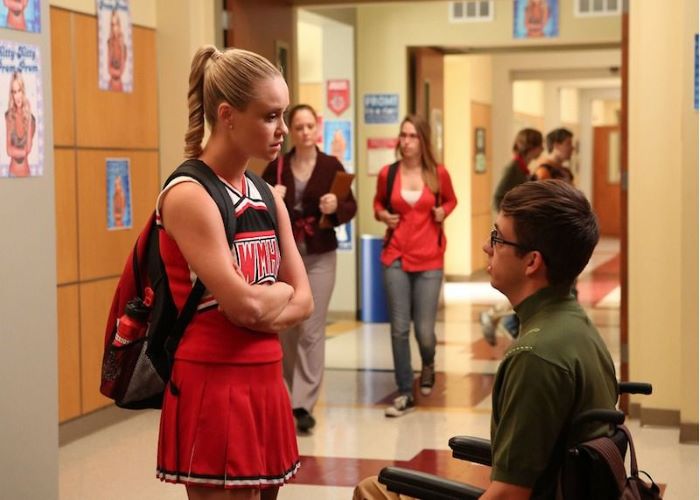 Does cheerleader ballbusting ring a bell?

Many victims of cheerleader ballbusting grow into subby masochists as adults.  You would think that cheerleaders are a happy, peppy group, right?  Well, we can also be Sadists who enjoy inflicting pain on men, as I can personally attest! When I was in school, there was a group of us, and some of us had been hurt by guys. Who hasn’t at some point, right? So a few of the girls and I decided to come up with a plan to dole out some pain to them. Now it would have been too obvious if we each went after the guys who hurt us, so we devised a plan.

If a guy hurt me, it would be up to one of my fellow cheerleader friends to cause him some pain in return. And so it went. We would come on to the guys that had hurt our friends and get them to go out with us. Tease them sexually, and then, while making it seem an accident, inflict pain. Cheerleader ballbusting sounds kind of funny, I realize, but it was a very real thing at our school. This one guy led my friend on and made her cry when he dropped her. He had flirted with me a few times, so I knew he’d take the bait.

He was on the football team.

I made him think I was interested in learning about the stupid game, so he said he’d show me how. I think you can see where this one is going. So he was holding the ball one time down to the ground to have me kick it. I still laugh when I think about what happened. He wasn’t laughing, I can assure you. I took a few quick steps and pretended to close my eyes as I kicked, but the football was not where my hard-kicking foot landed. I had to bite my lip to keep from laughing as my foot made contact with his crotch.

The look of disbelief, pain, shock, and speechlessness was enough to make any woman burst out laughing. He doubled over onto the ground on the football field. Out of breath, grabbing his crotch, making this low moaning sound. I had to pretend I was so sorry for kicking him in the nuts when really I was proud of my aim. It was hilarious, and my friend was watching out of sight as it happened. I could swear I heard a stifled giggle as it happened. He got up and never asked me out again.

Another time a girl on the cheerleading squad had a guy cheat on her, and his betrayal destroyed her.

We devised a plan for some cheerleader ballbusting. I volunteered to devise it but couldn’t execute it since it might become obvious it was planned. I had another girl tease her guy until he asked her out. He had a real thing for feet and shoes. Stilettos in particular. Then, she asked him back to her dorm after their date, and she’d left clothes all over the bed, so the only place he could sit was the floor. She was wearing some four-inch shoes with spike heels. She knew he was staring at them and getting hard.

Then, she walked back and forth, showing off her feet and shoes to him. She’d left some things on the floor as well and pretended to trip. I think we know where her foot with the spike heel landed, don’t we? Right in the middle of his bulge. She said he let out a scream like a little girl. There was even some blood by his zipper. I know, I know, it sounds extreme and cruel, but sometimes lessons need to be learned. He got up and hobbled out the door, bent over.

The cheerleader ballbusting just kept getting more and more imaginative.

A guy burned me, and I told one of the other girls what to do. My ex hung out at this bar a lot, and it was always crowded; they played pool there. He enjoyed a few games when he’d go. I had my friend ask if she could play for money, and he thought he’d make a few easy bucks and let her. Once she had that pool cue in hand, though, he didn’t see it coming. I had one of the other girls distract him by saying something to him. Before he knew it, he had a pool cue, the big end of it, slammed into his crotch.

She apologized and said she didn’t see him behind her when she was baking up the cue. Oh well, stabbed in the balls with a pool cue. He deserved that and a lot more. The cheerleader ballbusting was a lot of fun while it lasted.

For fetish phone sex, give me a call! Read more of my blogs for an edged ruined orgasm!