Cheating with BBC Gets Me Gangbanged All Night 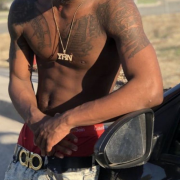 A night of cheating with the BBC goes beautifully wrong.

Cheating with BBC. What can I say? I love big black cock and all the black fuckbuddies I’ve had in the past. After all, I’m certainly no stranger to how big, thick, and meaty those cocks can be. I have a weakness: black guys. Let’s face it, I grew up in the South, and I was surrounded by big strong black guys growing up. To make it even naughtier, I was surrounded by gang members. At one point, there were all kinds of Hispanic guys because of where I lived. However, I moved closer to downtown a few years ago. In the golden age of The Game, Waka Flocka, Lil Wayne, and all those Blood gang-affiliated rappers. They set the trend and made gangbanging seem cool. And, of course, it made every other girl infatuated with gang members and bad boys.

I couldn’t help it. Truth be told, I’ve always been attracted to bad boys. There’s not much I can say to defend myself from that one! I was drawn to the thugs and gangsters when I was younger. Hell, they’re still beautiful. It’s what drew me in and had me so intoxicated with one of my ex-boyfriends. But the best about it all? It’s never been just the trouble or craziness that drew me in. Black guys have big cocks. That’s as simple as I can put my little secret kink! I’ve always been drawn to black men and cheating with BBC. They’ve been systematically bigger than any of the white guys I’ve been with. The white guys have been about seven inches, maybe six and a half.

The black guys have always had bigger cocks.

Yep, sorry to burst your bubble. It’s true. So, I’ve been cheating with BBC and drawn back to black guys every time. But this last time, the adventure grew wilder than I expected. I was seeing this guy, Logan, on and off. He’s this sweet country boy, tall and handsome. However, he certainly pales in comparison to my exes and some of their friends. So, when a few of them invited me to their Halloween party, I knew the truth. I would inevitably end up cheating with BBC that night. Knowing this, I donned the sexiest little black cat outfit I could get. I got all-black-everything: black corset, black heels, black stockings. Head to toe; I dressed up in all black, down to the pedicure. It was a deliciously sexy little one-piece corset outfit that I wore, too.

However, it was still straightforward for them to take it off, and that’s why I wore it. I could remove the costume with one little button pop and a zipper. It was important that Omari and his friends would take it off of me quickly that night. I showed up at their house party, ready to rock. My little cat ears looked adorable, and my cleavage and ass were all on display for them to look at and yearn for. Of course, as soon as Omari saw me, he spanked my ass as he walked by. He laced his arm around my waist and took me along upstairs without even saying a word. I knew what was going on.

He wanted to fuck me silly.

And he did. He tossed me on the bed and was all over me in seconds. His hands groped me hungrily, and I could feel his muscles ripple. His big black cock poked out through his jeans, rock hard, ready for attention, and already craving it. There I was, cheating with the BBC all over again. However, I definitely didn’t expect his friends to join in, to enter the room just after him. It was a reenactment of all my favorite black phone sex fantasies. My fuckbuddy, balls deep in me, pounding away mercilessly. Me, completely on the edge of losing it all, cumming for him over and over again. Then his friends walk in; this group of them was completely unknown to me. They had their bandanas out, jeans sagging a little, and all looking like complete thugs.

I was in pure bliss, honestly. He shoved all ten inches of his cock in me, and he leaned down to whisper, “You’re all ours tonight.” I absolutely lost my mind. I came for him right there. However, I didn’t get a chance to ride it out completely. His friends joined in, climbing on the bed. I felt their hands wander all over me. They groped, kissed, and touched. I could feel their hard cocks press up against me, just before one pulled me down to start sucking on his. Can you imagine how the rest of the night went? I can still feel them, and it’s been ten days since Halloween. It was nowhere as rough as the big black cock rape that made me fall in love with such rough sex, but it felt fucking amazing.

One Reply to “Cheating with BBC Gets Me Gangbanged All Night”