Cheating Girlfriend; He Belongs To Her But He Will Be Mine 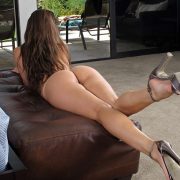 I Cheat All The Time

I’ve been a cheating girlfriend more than once. I have a high libido and like a lot of sexual variety, so it kind of happens. My roommate has a very handsome boyfriend, I’ve liked him since the first time I met him. I always thought he could do better than my roommate. He’s a far better-looking man than she is a woman. I hadn’t planned on anything happening, but it did. We were all hanging out and she got a call and had to leave unexpectedly. He was fine just staying there until she got back. A while later though she called and said she’d be several hours more. I assumed he’d leave, but he didn’t. He said he’d like to stay. One thing led to another and we were soon in bed.

I have a boyfriend myself. I’ve been a cheating girlfriend with him as well. He’s good enough in bed, but he just doesn’t want to fuck as much as I do. So I’ve looked elsewhere for sexual attention, and I’ve got it. This guy at work is a fuck buddy of mine. My boyfriend has no clue about him. We’ve got to fuck in his car on our lunch break many times. I’ve also stopped by his place on the way home from work as well. I love our fast and furious quickies we have. He leaves me absolutely breathless the way he fucks me. He just touches me and I get wet, knowing the fun that’s about to come.

It’s All In Fun

My boyfriend was away on a business trip last week out of town. He had no clue what a bad, cheating girlfriend I was in his absence. I not only entertained my work fuck buddy in his bed, but I had the roommate’s boyfriend over as well. He gave me the key to his house to house sit while he’s away and look after his dog. I doubt he’d be impressed I was entertaining men in his bed. Oh well, what he doesn’t know won’t hurt him.

I Was A Bit Out Of Control

I was getting fucked every day since he left, sometimes by the roommate’s boyfriend and my fuck buddy as well. And  I was washing sheets around the clock, lol. My pussy hasn’t been so satisfied in a long time. I hope his neighbors don’t say anything about all the comings and goings that were going on. I was going through a ton of lube from my pussy was cumming so much. And I nearly had friction burn from the two of them going at me all week. I had as much privacy as I wanted, using his home like my personal hotel.

It Was A Fun Time With No Regrets

Being a cheating girlfriend can be fun, but you need to learn how to get your stories straight, for sure. My roommate’s boyfriend and my fuck buddy almost ran into one another. It was a close call. I wasn’t able to shower between seeing them, I ran out of time. I felt like such a slut, but it was kind of fun as well. As soon as my boyfriend got back home, I fucked him as well. He said I sure must have been lonely while he was away. I nearly burst out laughing in his face. If only he knew.

I enjoy having all kinds of phone sex. Gfe, as well as cheating girlfriend, cheating wife,