Your Baby Weighs More Than You When You Are Changing Adult Diapers! 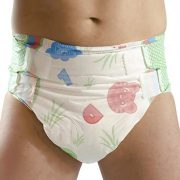 I found the creative world of changing adult diapers online.

Some very interesting individuals were willing to pay me after changing adult diapers for them! I met two guys on a site for adult baby diaper lover. Initially, I originally sought out a new main pay pig and I happened upon two men who seemed interested in making me their brand new mommy. I had the experience because I had nannied before and babysat. They were just like the kids I sat but like, adult men. They even needed their diapers changed too. Once I set a pretty price for my services, I became Mommy to these very different men. One of them was a submissive ‘and liked an authoritarian mommy who spanked him and humiliated him and the other was a baby who liked his mommy to be doting.

This mommy would change his diapers frequently and perform regular grooming/ care-taking habits for him, like giving him a bath or feeding him warm milk from the bottle. The first one I charged eighty dollars an hour and the second I charged two hundred forty-five dollars. This was because changing adult diapers was far more difficult than just tanning his hide for stealing cookies. The first one I met had no issues making his payments as he was some kind of well-known EDM musician, stuff that I never really took an interest in. My heart lies with British pop. He came over to my place despite my roommate’s protests.

He was normal and did not try to stalk me, although I do these sort of interactions a bit differently now.

I made him pick a switch from outside and bring it to me. Then I made him recite, “I will not disobey. I will act just as I am told.” He, of course, made a mistake because he was a beginner. I had him bend over the living room chair and I picked up the switch. Then, I yanked down his pants and made sure that every time I struck him, I also knicked his scrotum. He was my little bitch. I turned his ass a color darker than red. Needless to say, he left my house understanding who was boss and that his new mommy meant business. During our appointments, I was in charge of him and that included reprimanding him when he acted up. I whooped his ass over and over until it swelled over almost every inch.

When he was sniffling back tears and I sent him on his way. The other was much more elaborate and longer. He came over with his diaper bag stocked full of large diapers, a bottle, formula, and diaper cream. I took the bag and let him play on the floor for a bit. before I knew it, he had already messed in his diaper. What a stinky, filthy little baby he was! I tucked a little mat underneath his tushie and pulled off the velcro tabs of his diaper. He was so messy! I told him to pull his legs up and lace his fingers through his toes, grabbing his feet. His legs were too heavy for me to lift. He wobbled trying to do as told. I scooped up the mess from his bottom with the diaper.

Then I pulled some wipeys out three at a time and proceeded to wipe his messy little tush with them.

Then I set those wipeys right on the soiled diaper and rolled it up into itself. I wiped a tiny squirt of diaper cream on his tush and made sure to smear it even to prevent diaper rash. I then heated up some of his formula mixed with water in a little baby bottle and cradled him in my lap. Finally, I hummed to him while I fed him his bottle. He must have felt hungry because he finished the whole thing! I rolled him and burped him, and then his appointment ended just in time. I took the owed amount and we made a new appointment for a month from then so that he could save up. At that moment, I found out that changing adult diapers certainly wasn’t too difficult.

For fetish phone sex give me a call! Read more to hear about a mummification fetish!