I Was a Little Braceface a Couple of Years Ago, and Guys Loved It! 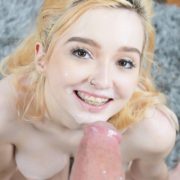 I was a braceface for a long time!

I never received any teasing for my little braceface. As a matter of fact, I think it made me even hotter to some guys! I remained stuck with braces for quite a bit of time, as I never wore my rubber bands. If you ever experienced braces, then you know that with them come these little rubber bands that basically band your jaw shut and move your lower jaw forward, very slowly. If you do not wear them enough, then you are stuck with braces for muck longer. I hated the rubber bands. I hated talking with my teeth closed and the sensation of having my mouth full right under my lips.

So, I usually did not wear my bands, and in doing so, received an additional two years with them on! My prime makeout years condemned to braces. That was five years with braces on. At the time, I felt upset about it. However, every guy I was with assured me that is, in fact, real cute. It seemed like I even attracted more guys also! Well, older guys, at least. Boys two-five years older than me began to pay attention to me, and I liked it! This older guy in my English class took an interest in me. He was tan. Sort of black Hispanic, but even today, I still wouldn’t know. He was one of the darkest kids in the entire school!

He always wore a ton of black, too, so that made him stick out.

Of course, with daddy as the dean of my tiny high school, I proceeded with care. Daddy knew this guy, and they didn’t get along. Daddy thought he was a degenerate punk, his words. He had curly black hair, and he was quite tall compared to all the other boys I dated. We were playing a little game in my English class before the teacher arrived. My English teacher would always make us pull the chairs and desks in a circle for discussion. In this circle, we played all sorts of games. This particular time, we circled around and told the class which we would fuck if we had to fuck someone in the class.

So many kids cracked under pressure and would say no one like the little bitches they were. I knew that when my turn arrived, I would state precisely who I’d fuck, without shame. Then, as my turn approached, I looked him dead in the eyes and gestured to him. Then, I said his name. He froze, and shock spread across his face. It dawned on me that he had no idea that I wanted to fuck him until that moment. He, when his turn approached, claimed me as his person to fuck as well. This made the game fun for us and super uncomfortable for everyone else involved. He wrote me a poem and handed it to me at the end of the day.

Then he asked if I wanted to hang out later, and I told him that I was free that night.

Instead of getting on the bus and going home, I went to his house, in his car.  We hung out in his room, and he kissed me. I apologized for my braces getting in the way, and he told me that he was turned on by them. He kissed me even deeper. Then he slid his tongue over my braces as he kissed me. Since he was older than me, I wanted to impress him. I got down on my knees to show him my perfect blow job skills. I smiled at him with my cute little braceface. His cock twitched, and he looked right at my braces. I stared him right in the eyes and jerked him off onto my face with my mouth wide open. I gave him a subtle flash of my braces and aimed his cock right at them.

Slowly, I felt those balls swell, and his cock grow engorged. I touched my tongue to his cum-hole, and he squirted all over my face, braces, and tongue. I realized being a little braceface wasn’t all that bad.

For teen phone sex give me a call! Read more of my blogs for an elaborate tickling fantasy!