I Met Someone Who Had an Elaborate Tickling Fantasy; I Did My Best! 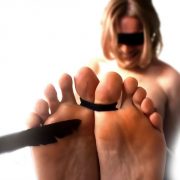 I once fucked this guy with an elaborate tickling fantasy.

I was worried that I would screw up his super elaborate tickling fantasy when he told me about it. He told me that he liked being tied up in a way that rendered him completely helpless and tickled with several implements, starting with a feather. I told him that he would have to instruct me along the way in case I messed up because I have never tickled anyone for sexual purposes before. He came over, and I made him strip naked. Once he was wonderfully vulnerable and exposed, I began to tie him up across my dining room table. He faced downward, and I  tied his arms and legs separate and downward. I made sure to fasten his limbs tightly to the legs of the table.

So tight that no withdrawing movement could occur in response to the tickling. His head dangled off the edge of the table, and his trunk laid flat up against it. He could not even lift his head to see what I was doing or where I was going to tickle him next. His hard cock was neatly tucked underneath the edge of the table and already dripping pre-cum. Then, I blindfolded him. I lifted the fether and dragged it up his sides in swift but repetitive strokes. He stood still and cringed. His cock grew harder. I traveled down to his ass and gave that a little tickle too. Then, I tickled his balls and all the way up to his cock. Pre-cum oozed out of his cock.

Then, I tickled up his foot arches and swiped back and forth over the curl of his toes.

Lastly, I twisted the feather as I dragged it up and down both of his armpits. I paid extra special attention to the deep and sensitive parts. Then, It was time for the hard stuff. I took a vibrating wand and stuck it right onto his taint. Then I slowly moved it up and underneath his balls. I brushed it lightly for a while; then I pressed into it. He wiggled, squirmed, and dripped more pre-cum. Then I gently dragged the vibrator up his cock and rested it on the tip. Pre-cum sprayed everywhere. I began pressure tickling him with my fingers. I dug them into his sides in quick little spidery motions. My hands moved up and down his sides.

Then it was time for his feet. I dragged the tips of my fingers up his feet and wiggled them right at his arches. Next was under and in between his toes. Last was the tips of his toes. I grabbed the vibrating butt-plug that he brought over. I turned it on and slowly worked it in while tickling him up his ribs again. Once it was in, I tickled underneath his underarms, and he looked like he was getting super close to bursting. I increased the pressure and the speed of the tickles. He squirmed so hard I thought he would break free of his restraints. I tied him down real tightly for this. Suddenly, I watched his eyes pop open, and he squealed like a little girl.

That bitch was going to contact me after that beautifully executed tickling I performed on him. Tisk tisk, that bitch never even returned the favor! What if I wanted to be tickled?

Call me for some fetish phone sex! Read more of my blogs for pussy pumping!