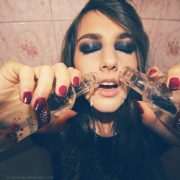 Have you ever had blackout drunk sex before?

Often, blackout drunk sex stories must be relayed back by third-party witnesses the next day. A couple of years ago, my friends and I threw a pretty awesome party in our apartment. I had just broken up with my boyfriend and I wanted to get fucked up that night! It landed on New Year’s Eve and we hosted about fifteen people that night. Once everyone had arrived, or at least the vast majority, the shots began. My best friend and I have this party rule. The house rule is that you must immediately slam three shots. We poured and passed the tequila left and right. My usual goal for our parties was eight shots. And never of that pussy flavored vodka shit.

I selected the hardest stuff there, to become drunk the quickest. Duh. We all played a little bit of white elephant and had a blast. We stopped every now and then to do more shots, of course. My best friend and I would yell, “SHOTS? YAAAASSSS SHOTTTSS!!!” and make everyone come and do more shots with us. No, was not an option. If a ninety-pound little girl can slam more shots, so can your ass. My ex insisted on coming to the party even though I dumped him/ kicked him out due to some loyalty/honesty/common sense issues. After the break-up, he resided with his parents who lived 3 hours away from the apartment.

That night it began to storm and this adult man made his mother drive his ass up to the party and “shop around” while he got drunk and “said goodbye to me and all of my friends”.

He even invited a weird little friend and told this kid that our New Year’s party was a going away party just for him. Like, what? It obviously wasn’t. Just to give understanding as to what I mean by honesty and common sense issues. By the time he and his friend came, we were all five shots in. I was already quite out of it. I already danced with one of the girls and ended up being dropped dangerously close to the fireplace on my head. Finally, I leaned back for a dip, and before I knew it, the ceiling became my vision. Some shit went down with him, but I don’t remember! I heard that he broke down into tears, wouldn’t stop kissing my face and fought with my best friend and left. I let him keep our dog, cause he was so damn lonely and pathetic.

It was the least I could do. So, in the throes of passion, I announced for more shots! Two more and I began to flirt with one of my friends. I was falling all over him and my body felt like jelly. He felt so cozy! The room began to spin hardcore. I went to the bathroom to go puke, and he sat next to me and we chatted. Nothing of which I can remember. Then my other friend came in to tell me that everyone had gone to bed. When I found stable ground, I decided to move to my bed. My friends tell me that somewhere in there I cried followed by hysterical laughter. The friend that I had my attention on insisted on sleeping in the room with me to make sure I was safe.

At this point, it was pretty clear that we were going to have blackout drunk sex.

I insisted that he sleep in bed with me instead of the floor. He crawled into bed with me and I could feel his hard rod behind me pressed against my tight little ass. I scooched back onto his cock and then he kissed me. Everything appears in my memory with quite a bit of holes and I must recount the details from here alone, as everyone else went to bed. Making out turned into us fucking missionary, then doggy and lastly finishing with one leg on his shoulder. I would have let him do anything to me then! I sucked his cock and gagged all over it! He came all over my face. I only remember the general stuff, but I woke up with that same cum, congealed, all over my face! That was only one of the times that I experienced blackout drunk sex.

Call me for some teen phone sex! Read more for some steamy hot tub sex!