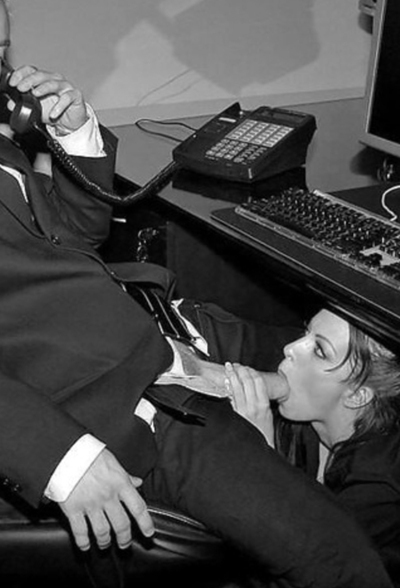 What is better than having leverage over someone, especially when that someone is your boss? Knowing that you can use this information to benefit yourself to no end, getting everything you want, and there is absolutely nothing he can do to stop it. That is exactly what I did to my boss. He thought that despite me being younger than he was, I would be ecstatic at the thought of fucking a rich, older man. Little did he know, that was nothing new for me and I was only out to get what I wanted, his money and the career advancement I deserved.

It all began with us fucking at the office. First, it was once a week, then twice, and then eventually I was sucking his cock under his desk while he was on calls with clients. Now it has become such a regular thing that I get to work early and even stay late at times to make sure that his cock was taken care of.

I knew that another coworker and I were competing for a promotion and I was not going to allow that under-qualified bitch beat me out. This is where fucking the boss was going to benefit me. I was going to use that to either one, get the promotion, or two, destroy his marriage and career if he passed me up. I could care less that he has provided me with a company car, bonuses, paid vacations, shopping sprees, and several hot business trips with him. I wanted that promotion and I was going to get it.

I arrived at work one morning before he did and I knew to expect him to want to fuck before the rest of the staff arrived. So, I set up a few cameras in areas where I knew I could get everything recorded and put my plan into action. When he came in and sat his stuff down, I went for it. I immediately unzipped his zipper and slid my hand inside to start rubbing  his cock. He grabbed my hair and pulled my head back, pressing his lips against mine. Devouring my mouth as his tongue slid deep inside my mouth. I pulled my hand out, unbuckled his belt, and unbuttoned his pants and forced them to the floor. He forced me down to my knees and shoved his HARD cock down my throat. I could feel his head piercing me with each thrust. I looked up to make sure the camera was recording and that he was not suspecting anything. He was too busy fucking my face to notice anything. He pinched my nose, forcing my mouth to open wider, and fucked my face so hard that he could have tore my mouth to pieces.

He pulled out of me long enough to bend me over and spread my cheeks apart and pound his rod into my WET pussy. Although I was using this moment to benefit myself, the guy sure knew how to fuck. For a second, I almost felt guilty. But like I said, for a second. I felt his balls pound against my clit each time he would thrust his cock inside. Harder and harder he began to pound. I knew this was not going to last much longer, I could tell he wanted to blow his load, so I had to get a little more on tape. I climbed on his desk and wrapped my legs around his neck. Putting us at the perfect angle to show our faces, he wrapped his hands around my legs and forced that throbbing cock of his back inside of my cock-loving pussy. With a few more HARD thrusts, he BLEW every last ounce of warm, creamy cum deep inside of my hole.

He pulled out of me, kissed my lips, pulled his pants up and left his office to go clean up. This gave me the perfect opportunity to grab the cameras and get out. I went back to my desk and started my day. He later received the email that was going to change our relationship forever… Let’s hope he makes the right choice!

How will our blackmail experience end?? Call me!