I Met a Couple of BI Curious Swingers and Followed Them Back to Their Place! 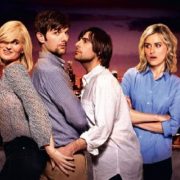 I was at this eighteen and over dance bar with my friend, and we met this couple of bi-curious swingers.

They had previously been swingers who just fucked members opposite sex in couples, but this time they came into the dance bar as bi-curious swingers. My friend and I decided that we would hit a couple of bars since we had just taken midterms, and we were going to celebrate that Friday. We brought a water bottle of alcohol and pregamed in the car before we went in. Then we went in and danced for a bit until we found this other couple. They were at the bar, and they offered to buy us drinks, but we informed them that we were under the legal age and couldn’t provide a valid license. They teased us for being young, but they clarified that they were only five years older than us.

After moving away from the bar so that they could talk to us, we began sharing information. They told us that they were poly and that they liked to include multiple people in their sex adventures. We laughed and revealed that we had hooked up a couple of times ourselves. They seemed to be flirting with us. They invited us back to their place, and by that time, we were pretty sure that they were trying to fuck us. We talked it out and decided that we were willing to play with them since we both found them attractive.

We sat on their couch and drank/ smoked pot from a rather expensive looking bong.

They began to sit rather close to us on the couch, but I wasn’t sure how they intended for this to work seeing as the dude was sitting next to my friend, and the girl was on the other side of me. The girl inched closer and closer until she wrapped her hand around my neck and kissed me. This was a surprise because I was under the impression that swinging was more of like a wife swap situation. But my friend asked what was going on, and they explained that they were bi-curious swingers and that both picked the same gender for themselves in us. My friend asked if that meant that the guy wanted to fuck him, and the guy said yes.

He stopped to think for a second and then decided that he wanted to give it a go. I was glad because the girl looked super hot and they seemed cool. I watched my friend kiss this dude, and it turned me on. Then, I kissed this girl while listening to my friend, breathing heavy, knowing that he was kissing another man. He totally thought it was hot when I kissed the guy’s wife too. I slid my hand up her dress and tugged her panties down. I rubbed her clit with one hand while cupping her braless tit in my other hand. Then, I kissed her deep and caught a glance of my guy friend peeling the clothes of this guy off and bending him over the arm of the chair.

He kissed all over the guy’s back and began to fuck him.

Call me for some teen phone sex! Read more of my blogs for humiliating two subs.