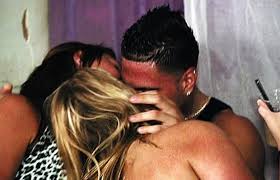 Back To School POOL PARTY

My annual summer back-to-school pool party was off to big bang. I cooked the food and made the champagne punch and everybody, young and not so young was having a great time. Especially Mr. Johnson who just got his cock sucked by yours truly and I just deep-throated young Scotty who’s on my son’s basketball team. I was trying to tend to my hostess duties. I spotted Mr. Williams, my son’s Math teacher giving me that look. Mmm…what a hottie. I’ve got plans for that cock.

I slipped away and met Mr. Williams in the utility room. He was tall, dark, handsome, and hung. We locked the door and my bikini top was on the floor and his pants were down and his cock was out. “You’re so goddamn hot, Miss Genie, I want to fuck you so damn bad.” I pulled him down to the mattress on the floor and said, “Well, get to fucking, teach, show me how long this cock of yours can reach.” He pulled down my bikini bottoms and shoved that long dong deep inside my pussy and rammed it in so hard and fast and fucked the hell out of me for 10 minutes. He came so hard. Good thing I had a towel handy. We got dressed and I left first and he followed. I figured he wouldn’t tell because that could end his career.

The party was still underway and no one seemed to miss me.

The music was jumping and young and old were dancing and swimming and eating and drinking. I thought I had done my quota of sucking and fucking until, Ginger,  the captain of the cheerleading squad came up to me and whispered, “Miss Genie, my boyfriend is dying to do a three-way with me and another girl but I think you are so sexy. Would you do it with us?” Her boyfriend was a young black guy hottie named Eric with a bulge in his pants that got me wet again. I told her to follow me but that no one else could know.

When we got to the utility room she took off her bikini top and took off mine. Eric said, “I want to see you two kiss.” So I pulled the young girl close to me and started tongue kissing her. She got so excited she started sucking my titties and saw Eric stroking his cock. I pushed Ginger’s face down between my legs and made her lick my pussy and she did it like she had been dreaming about it. Eric’s black cock was so hard. He pushed her aside and shoved his cock in my pussy and fucked me so damn good. Then Ginger sat on my face and I ate and licked her sweet young clit as Eric continued to fuck me.

After the three way I snuck out first and they followed later.

Ginger’s mother came up to me and said, “Miss Genie, you throw a great party every year. My daughter Ginger is such a big fan of yours.” I said, “I know. She was just telling me how much she admires me.”

Back To School POOL PARTY Part 2