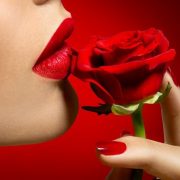 Yeah, I Definitely Fucked Every Guy on the Show!

So, I have a secret I’ve been keeping. I was chosen to be The Bachelorette! But, filming only lasted for one day because I completely threw the show off course right from the start. By the end of the first night, I fucked every guy on the show. They told me they had to cancel my season because they wouldn’t be able to air anything. Haha, oops!

Can you really blame me though? I had 30 hot guys competing for my attention. It was so intoxicating I just couldn’t control myself. I’m sure you’d do the same in my position with 30 hot chicks all over you. It’s like the ultimate fantasy and I got to live it!

So, in case you don’t know, the show starts with each contestant meeting The Bachelorette one-on-one. The guys pull up in a limo and try to give their best first impression. This part was really fun. I was dressed in a beautiful sparkly black cocktail gown and stilettos. The neckline plunged past my huge tits and my beautiful jugs were on full display. I know I looked like a knockout because every guy was entranced by my tits.

As each hottie exited the limo, I pictured what it would be like to fuck all of them. To be honest, I couldn’t believe how hot they all were. I warned the producers that I was picky and needed the guys to be smoking hot and super fit. They came through! Literally, each and every contestant made my pussy tingle. So much so that I fucked every guy on the show!

Once I met all the guys, I gathered them in the luxurious home and asked them all to strip down so I could take in their rippling muscles… and get a peek at what they were packing. They all eagerly agreed. I felt like they would do anything I asked of them, it’s like they were already in love and they hadn’t even had my pussy yet.

Forget Giving Out Roses, I Gave Out Pussy

Two really buff black guys stood next to each other looking so delicious I needed a taste. I thought I’d start with them to show the rest of the guys what was up. I knelt before them, grabbed their full packages, then pulled down their boxer briefs. Each cock bounced out semi-erect. I took turns sucking on each one back and forth and they were rock solid in no time. The rest of the guys were all excited now that they knew what they were all in for. I couldn’t wait to let them all take a turn on my pussy. But, first, they all got in line to put their cocks in my mouth.

Soon, I got all 30 guys rock hard. Some were a little too excited and dribbled down my cleavage. That’s when I knew it was time to slip out of my dress. A few guys helped me out of it and then I was passed around like a prized jewel as each guy got to put his cock in me. I’d never had so many guys at once and I couldn’t contain my excitement. I came with almost every guy, especially when they started to double penetrate me. Even a camera guy got in on it and ate my pretty cream pie. In return, I gave him a golden shower surprise, the guys loved it.

I can’t believe they continued to film the whole thing while I fucked every guy. It won’t air but I’m sure it’s in some private collections.

Do you want me to be your Bachelorette? Call me for some roleplay phone sex!