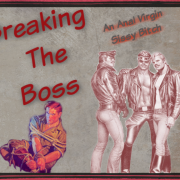 Brad started pushing his huge phallus into our little bitch’s throat until he gagged on it.  When the gagging started, he would hold it in place until it stopped. Then he’d pull out, and let boss-man gasp for air for about two seconds.  And then right back down his throat again.

Did you think that Brad finished with boss-man after only a few thrusts down his throat?  Yes, they were quite brutal thrusts meant to torture and humiliate our captive. But no, of course he wasn’t done.  As it turns out, he wasn’t even close to feeling like he had gotten his revenge.

It continued for an impossibly long time

Each time he pushed his long cock in deeper and harder than the last.  Brad was training him to be his personal cock loving sissy bitch! This continued for an impossibly long time – so long it was probably testing the endurance of both of them.  He was fucking his throat so deep now that I was starting to be able to see Brad’s huge cock distending boss-man’s throat from the outside.  I have to admit, that was one of the hottest things I’ve ever seen.

But, just as Brad was tucking his well-sucked cock back into his pants, his phone rang.  I heard him say “Great!  You’re here.” Come down to the basement.” And boss-man realized that his ordeal was not over when three guys who were more bear than twink walked in. “This is my boyfriend and my two best friends,” Brad said.  “I’ve told them to do whatever the fuck they want to you.”

The second guy must have thought the very same thing that I was thinking as he unzipped his pants and took out a large cock almost as impressive as the first guy’s.  He did his cock reveal right in front of boss-man’s face.  This was so he could see the size of what was guy #2 was about to very roughly shove up his tight little virgin ass. Guy #2 then headed round to our victim’s backside and positioned our anal virgin sissy bitch in a way that he and guy #1 could both access one of his holes.  One from the front and one from the back.

An agonizing and impossible choice

In what initially seemed to be a kindness but turned out to be an agonizing and impossible choice, all three men decided that boss-man could choose which cock went into both of his holes.  The fun part was that he could also choose guy #3 who so far had kept his dick in his pants and therefore its size a mystery. It could be even bigger or much smaller. Our captive did not seem to want to make this choice but they forced him to.