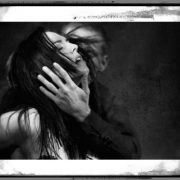 I’ve had a lot of cocks in my mouth, but this was different

He came all over my face instead

I started to wipe it off but he told that I was never to do that. He then told me to stay on my knees and let it drip onto my big tits. After a few minutes, he told me to lick as much of it off of my breasts as I could, which I did. After I slurped up as much s I could, he stood in front of me and told me to make him hard again. I took him in my hand and started stroking it until he was rock hard again. Not surprisingly, this took no time at all. He said he was going to fuck me, which instantly made my pussy drip in anticipation. And I wanted to cry when I remembered that I was to be his anal only slut.

He ordered me onto my hands and knees with my nice round ass in the air.

I was relieved when I felt his fingers starting to lube up my tight hole. I hadn’t been sure if he would do that. After he made his huge phallus nice and slick I felt him behind me and felt that big cock head starting to push into my entrance. I was really scared that he was going to hurt me because he was so big, and the first inch he pushed in did not calm my fears at all. He said that it was important that he push hard and not stop if he was going to be able to get all the way in. Then he surprised me by telling me that I was now allowed to cum any time I wanted! I almost cried again, thinking that I would soon have relief from this intense ache in my clit.