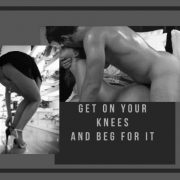 Later that day he went over more rules for me. I remember thinking that the ones he had already given me were more than enough. But apparently, it was not – not even close. I had agreed before I even got here that I would obey all of his rules but I was not prepared for the extent of his fondness for regulation, control, and order. Now that we both knew that I was going to stay for the three days, I needed to know my place. He said that his goal was not to make me miserable but to train me to be submissive and obedient.

I already knew most of his rules

Clothing – I was to be naked at all times unless he specified otherwise. I had been naked since I walked in the front door when he took my clothes away and I didn’t even know where he put them. I would end up remaining that way at all times during those three days.

I was an owned object

Orgasms (mine) – Only with his permission, which he rarely ever gave. Also, no touching my pussy or my nipples without permission and I would always have to beg for that privilege. Of course, he never allowed me to ask for it.

He assured me that it would get easier

He said that he enjoyed vaginal sex a great deal but this rule was about my training and learning to be obedient more than anything. Knowing that I would find this very difficult, he assured me that it would get easier. He abandoned his Dom persona a bit as he went on. “Believe it or not, I think you’ll really learn to like all of this after a while. I know your personality type and I know that you have the potential to do very well in this lifestyle. It’s clear this all of this is overwhelming to you, which is understandable. But I hope that you are willing to give me a chance. You owe me at least that.” This was very flattering to me and I decided to go along with being a willing slutty captive and also really try to enjoy it.