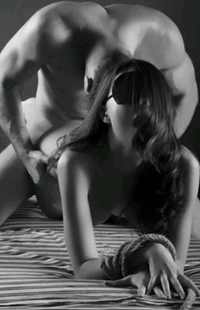 When I was a teen I dated an older guy named Jesse. He turned me from shy little girl to a sexy hungry woman. He showed me that sex was something to enjoy. That is was not just men that should go out and fulfill their fantasies.  Jesse introduced me to all kinds fetishes, including anal sex fetish, bondage, and dirty talk. I discovered I loved being tied up and helpless while he used me any way he wanted and called me dirty names.  I grew to love being called a slut and a whore, and acting like one for him. When I was tied up and blindfolded he use to tell me he was going to get another guy, to come use me like the whore I was. The idea of it made me really hot.

“You like that idea, don’t you,” he asked as he wiped his cock across my lips.

I started to feel a cock being pushed between my lips, so I opened my mouth and sucked it in.

It felt bigger then Jesse’s almost seeming to be too much for my little mouth. A couple fingers were now probing and my wet cunt, I tried pushing against them so they would go further into my receptive hole.  The stranger pulled his cock out of my mouth and positioned himself over me. I was tingling with anticipation, as I yelled out for him to fuck me. I could feel his cock parting my folds, he slammed into me hard. As he was driving his fat cock into me, I thought this must be what it feels like to really be a whore.

I felt my legs being untied and was rolled over on my stomach. Was actually loving this, he was using me strictly for his pleasure, doing whatever he wanted to me. He pulled my ass into the air and I told him how much I loved doggie. Two fingers were pushed back into my cunt and retreated covered and sticky juice. To my surprise he rubbed them over my asshole, then slid a finger into my ass, it made me squirm a little. I heard Jesse tell him, “yes, you can fuck her ass.” This guy obviously had an anal sex fetish also. I felt the tip of his cock probing my asshole unrelentingly.

Then I told him it was too big, but it did not disengage him, he just increased the pressure until I felt the head pop right in.

“Shit it hurts so good,” I yelled out but he paid no mind to whether it hurt or not he just kept on pushing inch by inch into me. When I felt I couldn’t take any more I begged him to stop. He stopped for a moment then thrust the rest of his cock deep inside me. He started to rock that cock in and out of me and I start feeling ripples of pleasure as the stinging sensation started to subside.

I could hear Jesse saying “Ahh that’s fantastic, I didn’t know she would be so nasty.”