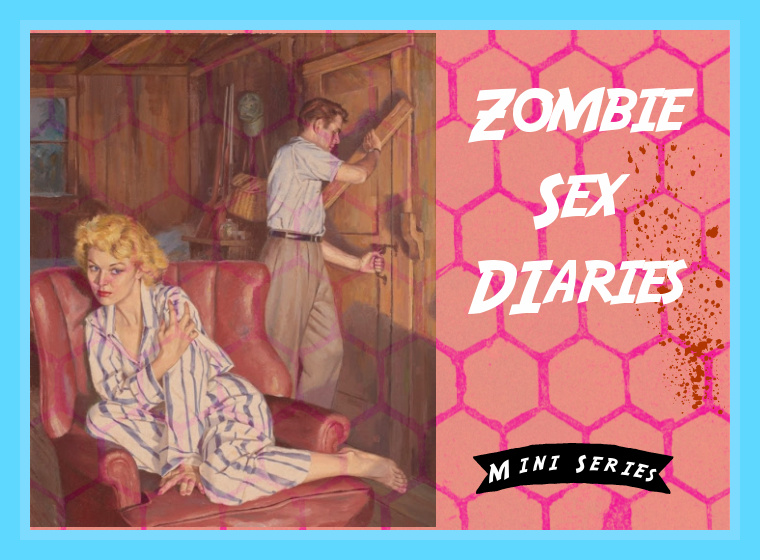 Adjusting was not something that Helen had to do often, so her adaptability in this situation had been impressive.  Having a zombie husband was not ideal, but in trying times, one did what one must.  Besides, it was something that seemed to be crushing their hard-working nation overnight. Monster sex was rampant!

When the generators finally did kick on and she got that rickety radio running again, she was met with a panicked host.  The zombie virus had swept the world, and people were coming up with new and inventive ways to survive. As a newlywed, Helen felt that she had to do more than survive.  She had just taken those vows- sickness and health. Indeed, she could not abandon John!

She knew she had to take this change like a pro.  John was indisposed, tied down to the bed. Primarily for Helen’s safety, as he had become volatile in a matter of hours.  She had stripped down his clothes to keep his body temperature in check with warm blankets and keep an eye on the bruising he had developed.

Helen Was Willing To Try New Things For A Normal Life

She knew that her new life would not be ideal, but life rarely was.  Wifely duties must continue in this unique situation!  So, she fed him raw squirrel and tried to keep that damned wound clean. One thing had improved since she had acquired a zombie spouse- zombie sex was superior to vanilla.

Helen was not as innocent as she pretended to be. She had often put out but was disappointed by her sexual experiences. Once they were married, she had been sure John would be no different. With his worsening condition, however, that was a problem of the past.

Monster sex wasn’t bad at all!  Once you got past the growling and discolored flesh, it was great!  Sure, John struggled against his bindings, unable to disguise his hunger for her flesh. If he’d had his way, he would have eaten her already- and not in the sexy way he had promised before.  Helen would miss their kisses, but her newly changed husband’s constantly hard cock made up for it. She could ride John until she was actually finished.  That was something mortal men could rarely handle.

Could John See How Much She Loved Zombie Cock?

Helen was happier with a zombie husband.  He never complained anymore after biting off his tongue. Plus, she had sex when she wanted to instead of when she felt obligated. She often reminisced about the first time she had given in to her carnal desires with her new zombie husband.

On his first night infected, Helen had looked over at John and noticed that his cock was rock hard. Zombie sex seemed taboo, but she felt a deep curiosity and an obligation to relieve him of his erection. After all,  it was her job to take care of him!

Helen climbed on top of her grunting husband and lifted her nightgown.  Slowly, she slid the cold, hard dick into her dripping cunt.  She did not want to admit that this whole thing turned her on, but her pussy betrayed her.

John’s dick felt more fulfilling than any man in the past.  It was due to his permanently stiff member. No ordinary man’s cock could come close.  She found herself bucking back and forth on her new favorite toy.  Zombie dick ruled!

Call and have a blast this Halloween with Hot As Hell Role Play Phone Sex.