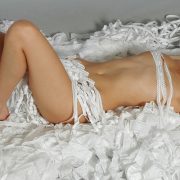 Diane was a cute little thing. She had huge tits for her 5’1” frame. They looked like watermelons on her, honestly. And she was sensitive there. Couple that with her Latina ass (very fine and round), and Diane was a walking sex dream. Even I’d thought about playing with her once or twice.

She left us alone after that.

Surprise At My Door

Well, if I’m called too provocative, I’m going to put that to the test. I was still worked up from Diane’s chastising. So, the best way to get rid of those frustrations, I decided, was to get fucked myself.

I began my preparations in my apartment by putting on my makeup- heavy red lipstick, glittery eyeshadow- and began to slip into a too-tight dress. Then suddenly, a knock sounded at my door.

Surprised, I opened it, half-naked, no dress on.

More surprisingly, Diane the prude had a red face when she saw me. Rather than hide, I widened my stance, making sure she could see my boobs bouncing in the tight bra.

It took about two minutes for her face to change from that cherry-red into a lesser red. “I’m getting ready to ‘slut it up’,” I told her. “If you’ve got nothing to say, don’t waste my time.”

It took about five minutes for the shock to leave my face.

“Open your mouth and take this pill,” I demanded once we reached the club. She was dressed out as much as a whore as I could make her. Her breasts practically popped out of the top of her dress, and her ass was so round, it stretched out the bottom of her dress. At the right angle (so any other than head-on), you could see her pussy. But don’t worry. I made sure she didn’t wear any panties.

“I don’t want to take-“ with her mouth open, I popped the pill in my own mouth and pressed her into a kiss. Despite being a prude, her body melted into my touch. A few of the guys in line began to cheer for us as I reached my hand in between her thighs, making sure she got nice and wet.

“Eager, isn’t she?” Someone said to my right, while Diane continued to act like a bitch in heat.

A few more interested parties were gathering by, all men who happened to be sporting large packages. Diane kissed my neck, presenting her pussy to all of them on her knees. “We can help with that,” one teased and put his fingers inside her wet cunt. “Damn. She’s really fucking begging for it, huh?”

Motioning to a few of the guys around me, I picked Diane up. She wrapped her legs around me, rutting against my hips, the slut. “Need it,” she breathed, trying to rub up against me.

One of the men crowded around us spoke. “I don’t think she can make it,” he laughed. Another guy agreed, rubbing his very large cock through his pants. “Come on. The bathroom.”

I can’t imagine what we looked like. But all of us quickly moved into the men’s bathroom, the strobe lights in effect, there, too. One of them gasped and tore Diane away from me. “I can’t hold it, the little slut.” In a quick motion, he tossed her onto the floor and pulled out his cock, red and throbbing. Almost instantly he came all over her face, gasping as she giggled. Her face flushed while she reached up to his cum on her face, rubbing it into her skin and then tasting it on her fingers. “I need more,” she pleaded.

In the same breath, “I’m too hot,” escaped her lips. Soon she tried to take off the dress. Luckily, the men were more than willing to help her. Rather than take her dress off, one pulled it up to her waist. Then, he turned her hips around so he could sink his nice thick cock into her pussy.

Want to hear more about my club trips? It doesn’t cost half as much as a club does! Call for some cheap phone sex!