My Wild Strip Club Experience with a Smoking Hot Stripper 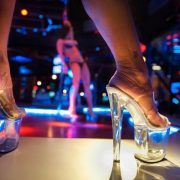 We walked into the strip club and immediately ordered more drinks. We were not going to hold back tonight! Bella and I took seats in front of the stage next to a group of rowdy young frat boys. Of course, they checked out us MILFs in our black skin-tight dresses. We looked dressed to take the stage and spin on the pole ourselves.

The young red-headed stripper that came out was smoking hot! She pranced around the stage in her glittery head-to-toe outfit: a bra that barely covered her big tits, a tiny skirt that did not cover up the bottom of her plump ass cheeks, and typical stripper heels that made her much taller than her small frame. She had the look of a sweet innocent virgin but she danced like a nasty slut and she captured my full attention as she twirled around the pole.

The frat boys seemed to have included Bella and me in their group. Bella was already picking out her one-night stand for the night among the boys. But, like I said, I wasn’t up for cock tonight, young pussy was what I was craving. I locked eyes with the red-headed stripper and she returned my gaze. The frat boys were cheering for her loudly but it was like she was dancing just for me. She checked me out just as the boys did earlier.

The alcohol is what really fueled this wild strip club experience. After the smoking hot stripper finished her first song I was cheering for her loudly along with the boys. She was definitely a crowd favorite. At the start of the next song, she finally removed her bra and let her big natural titties bounce around. Then she crawled towards me across the stage and kneeled in front of us playing with her milky white tits and squeezing her nipples. Everyone started throwing money at the stage.

Now she stood with her ass facing us and bent down to twerk to the beat of the song. We all got a good look at her asshole and pussy because she wasn’t wearing a thong underneath that tiny skirt. This sent everyone into a frenzy. This club was strictly topless so we all loved that she was breaking the rules.

This wild strip club experience really started when she sat on her ass and opened her legs for a clear view of her tiny bare twat. Her hips were thrusting towards me and cash rained down on her from the frat boys. That’s when my liquid courage took over.

I knew this was completely against the rules but I just couldn’t help myself. She was the hottest, sexiest stripper I had ever seen and she was flaunting her bare twat in my face.

I leaned over the stage, grabbed her tiny skirt, and pulled her towards me. She didn’t stop me, she wanted it. Then I buried my face between her smooth white legs and started licking her clit slowly. The frat boys and Bella were going wild behind me, they’d never seen a stripper get eaten out on stage. The stripper thrust her hips into my mouth and moaned in sweet pleasure. During her whole next song, I continued to eat her sweet young pussy. I really wanted to make her cum so I flicked her clit faster and faster and finger fucked her at the same time.

She screamed out when she came and held my head drown on her pussy until her spasms ended. We put on quite a show, everyone in the club stopped what they were doing to watch. The stage was now covered in cash and she slipped a twenty in my bra before she walked off stage.

Do you have a wild strip club experience or fantasy you want to play out with me? Then call me for smoking hot phone sex!