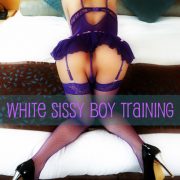 Yeah, he will make a perfect little white sissy boy!

I opened his car door and ordered him to get out.  His jogging pants halfway down and his pink panties squeezing his little cock.   Grabbing my phone from my jeans and I took a couple of blackmail pics for leverage.    He tried to pull up his pants quickly but before he could even blink I already had several pictures of my new little white sissy boy.   He reached for my phone in a panic, but I slapped his cock jerking fingers away. Making it clear, that at no time is he to ever grab anything from me.   I told him to pull up his pants and to get into my car. He protested even pulling away from me. However, that stopped after I advised him that he did not want to make a scene.

Speaking stern, my voice just barely over a whisper,  it was time I let him know that I was his new Ebony Queen. I could hear the beating of his heart, as I described his new role.    Grabbing him by the arm, I lead him to the passenger side of my car and told him to get in.  Yes, he was nervous, excited, and scared but he was ready to be the new white sissy boy that I needed.   I got into the driver side of the car and we headed out of the gated community. As we drove to the seclusion of my home, I was able to find out a lot of information about my new little toy.  For instance, his wife thought of him as the man of the house.

He loved wearing her panties, watching porn, and figuring his little ass hole.    Yet, he also admits to being a virgin and never having his cherry popped.  I knew once we pulled into my place that all that was about to change.  We entered my garage and he followed me into the house.  I poured us both a stiff drink to lighten the tense mood.  We retired into the master bedroom where I picked out the perfect lingerie set.  I could tell he was excited and ready to explore this new side of himself.    He headed to the bathroom to shower and be ready for me to transform him into a worthy sissy sex toy.

Would you like to hear all about the naughty sissy sex stories?  Or maybe you want your own bisexual phone sex experience.